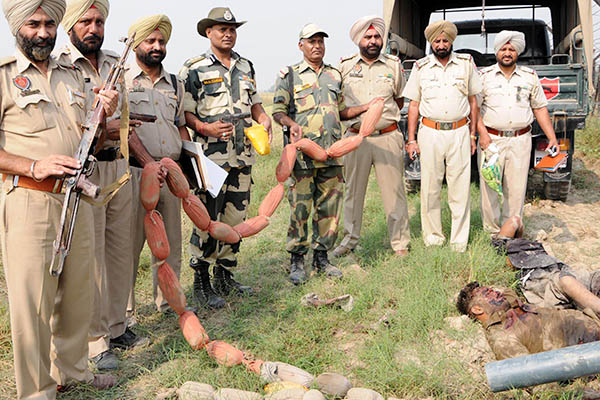 Criminals were attempting to sneak into India through Punjab province and were carrying 24kg of heroin worth Rs. 1.2 billion.

“Last night, three Pakistani intruders crossed over to the Indian territory and were challenged by the BSF night patrol, but the intruders declined to surrender and fired gun shots at the BSF,” Ajay Tomar, Punjab BSF Inspector General, told reporters. “In retaliation, BSF troops fired 19 rounds and the intruders were killed on the spot.”

A massive search has been launched to check for any other people crossing illegally from Pakistan in the area near the Wagah international border crossing, he said. Wagah is the only road border crossing between the Indian city of Amritsar and the Pakistani city of Lahore.

Local media reported last week that the BSF had seized 100 kilograms of heroin worth Rs. 5 billion in the last two months, adding that drug trafficking had spiked at the border, which prompted BSF to increase round-the-clock patrolling.

Punjab, once the wealthiest state in Asia’s third-largest economy, has now become a key smuggling route for drugs that come in from neighboring Pakistan and Afghanistan. Punjab’s slowing economy and high unemployment rates have made youth more vulnerable to drug addiction, experts say.

The drugs smuggled into India are mainly destined for Europe, but also find buyers in the state of 27 million. It is estimated that two-thirds of all rural households in Punjab have at least one drug addict, according to a 2009 state survey.