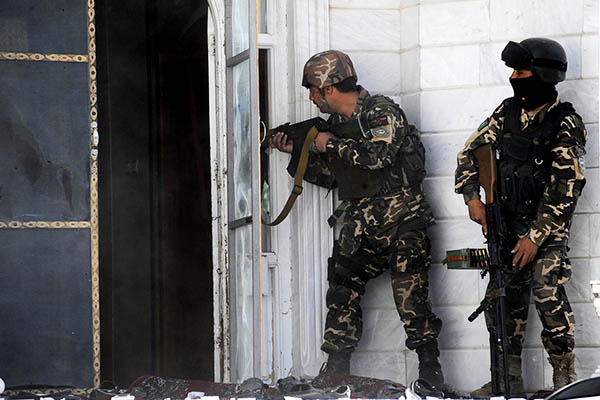 No immediate reports of casualties in pre-dawn attack.

Gunmen launched a pre-dawn attack on India’s consulate in the Afghan city of Herat on Friday before being repelled by security forces, the foreign ministry in New Delhi said.

While there were no immediate reports of casualties among staff at the mission, the attack underlined the precarious security situation in Afghanistan ahead of a presidential election run-off next month.

India has previously accused Pakistan’s security services of being behind attacks on Indian targets in Afghanistan, and the assault comes only days after incoming prime minister Narendra Modi invited his Pakistani counterpart Nawaz Sharif to his inauguration ceremony in Delhi next Monday.

“Earlier this morning, the Indian consulate in Herat was attacked,” foreign ministry spokesman Syed Akbaruddin told the news channel NDTV. “One gunman was shot by the ITBP [Indo-Tibetan Border Police] while they were trying to breach the consulate,” he said, adding that Indian and Afghan security forces had been “successful in rebutting this attack.”

However, according to the Press Trust of India, police killed two of the attackers as one continued to fire on security forces.

Three gunmen armed with machine guns and rocket-propelled grenades opened fire on the consulate from a nearby home around 3:30 a.m. and continued the attack for several hours, NDTV’s website said.

In a statement, Pakistan’s Foreign Office condemned the attack. “Pakistan condemns the reported gunmen attack on the Consulate General of India in Herat today and reiterates its condemnation of terrorism in all its forms and manifestations,” it says, adding that there was no justification for targeting diplomatic missions. “It is a matter of relief that no one from the Consulate staff was hurt,” it added.

Afghanistan has seen a major flare-up in violence ahead of a run-off presidential election on June 14, with 16 policemen killed in a series of attacks in the space of 24 hours earlier this week. Providing security for the election will be a key test for around 350,000 Afghan police and soldiers who have taken over full responsibility from NATO combat troops.

Friday’s assault against the consulate in Herat is the latest in a long line of attacks against Indian targets in Afghanistan. Nine civilians, including seven children, were killed in August last year when suicide bombers targeted the Indian consulate in Jalalabad, detonating an explosives-packed car.

In 2008, a car bomb at the Indian embassy in Kabul killed 60 people and the embassy was again hit by a suicide strike in 2009. And in 2010, two guesthouses in Kabul used by Indians were attacked. India was one of the chief enemies of the hardline Taliban regime that ruled Afghanistan before its ouster in the wake of the September 11 attacks on New York and Washington.

Pakistan was the Taliban’s main ally and there have been accusations in India that the Pakistani security forces were complicit in previous attacks on its missions in Afghanistan.

Sharif is still mulling whether to take up the invitation to attend Modi’s swearing-in ceremony, in what many hoped would help ease tensions between the nuclear-armed neighbors.