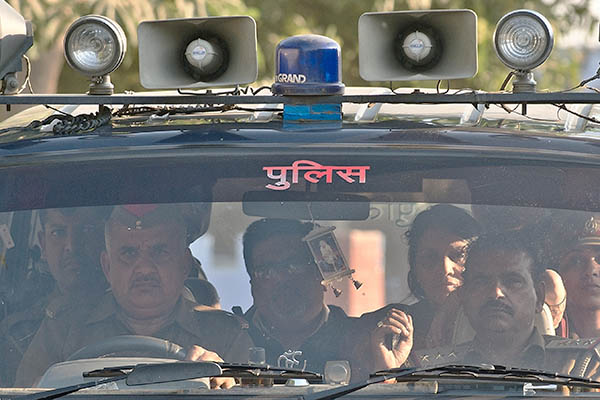 Court convicts Rajesh and Nupur Talwar for murdering their 14-year-old daughter and Nepalese servant in 2008.

An Indian couple could face the death penalty after a judge convicted them on Monday of murdering their teenage daughter and a servant.

Rajesh and Nupur Talwar are due to be sentenced today after being found guilty of slitting the throats of Aarushi, 14, and their Nepalese live-in help, Hemraj Banjade, with “clinical precision” at their home in an affluent New Delhi suburb in May 2008.

“The penalty is life imprisonment or death—there are only two sentences,” prosecutor R. K. Saini told a horde of reporters at the decrepit court complex in Ghaziabad, a satellite city of the Indian capital. Saini, who declared he had “done his duty,” said he would reveal on Tuesday whether he would argue for the death penalty for the Talwars, who were immediately taken into custody.

Investigators alleged the Talwars killed Aarushi in a fit of rage when they found her with the 45-year-old servant in an “objectionable” situation, while the couple insists they are victims of a bungled police probe and a media witch-hunt. Police have suggested that the double-murder was a so-called honor killing.

The trial came as India increasingly focuses on violent crimes against women following the fatal gang rape of a student in Delhi last year that sparked national outrage. The case has spawned a nation of armchair detectives debating every twist in the investigation, turned the Talwars into household names, and polarized public opinion.

The prosecution conceded there was no forensic or material evidence against the couple, and based its case on the “last-seen theory”—which holds that the victims were last seen with the accused.

“We only have truth on our side, the facts and evidence as we knew them,” Vandana Talwar, Rajesh’s sister-in-law, told reporters. “But we’re pitched against an organization [the Central Bureau of Investigation] that believes and deals with fabrications, manipulations, with suppressing and hiding all the facts showing the parents are innocent,” she said.

Aarushi, who friends described as a chirpy, high-achieving student, was found on her bed with her throat cut one morning in May 2008. Police initially blamed the missing domestic servant Hemraj—only to discover his decomposing body on the roof a day later. His throat was also cut and he had a head wound. Officers then arrested Rajesh Talwar’s dental assistant along with two other local servants—Hemraj’s friends—but they were freed due to lack of evidence.

The botched probe—investigators failed to seal the crime scene, allowing neighbors, relatives, and journalists to swarm over it, or to find the second body for over 24 hours—prompted police to close the case in 2010, citing no substantial evidence. The Talwars insisted they wanted the killers found and petitioned the court to reopen the case. Rajesh said in a recent interview that Aarushi’s death had “been the deepest grief I have ever known.”

But police ended up charging the parents with murder, as they became the center of media frenzy. Salacious news reports, based often on claims by unnamed police sources, appeared about their lives, demonizing them as decadent—even part of a wife-swapping club—leading to criticism that the Talwars were being subject to “trial by media.” The case so obsessed the public that one man with no link to the case attacked Rajesh with a meat cleaver during a court appearance in 2011, leaving his cheek and hand deeply scarred.

After the verdict, the Talwars issued a statement saying they “refused to feel defeated” and would “continue to fight for justice.” Top criminal lawyer Rebecca John, who is leading the defense and representing the Talwars for free, said the verdict would be appealed. The Talwars have been “caught up in a nightmare,” said John. “I will not rest until this couple’s names are cleared.”

One of the most complicated case ever in the history of india.Truth is still not known actually who mudered her.