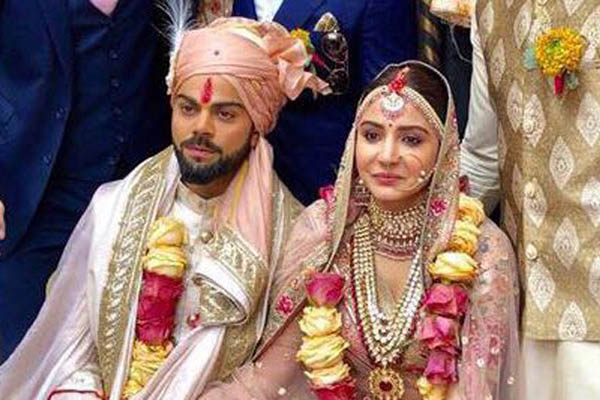 The pair will host a reception for relatives in native India on Dec. 21

Indian cricket captain Virat Kohli and Bollywood actress Anushka Sharma got married in Italy on Monday, they said in a statement, ending weeks of frenzied speculation that they were getting hitched.

“Today we have promised each other to be bound in love forever. We are truly blessed to share the news with you,” the celebrity couple said, adding that it had been a “beautiful day.”

A statement sent to journalists said the wedding had been attended by close family and a few friends as “they wished their wedding to be a very private affair.” The ceremony was performed according to Hindu rituals, it added.

Kohli and Sharma, both 29, posted different photos of themselves smiling together and dressed in colorful Indian wedding garb on their Twitter feeds late Monday. The pastel, pink outfits were created by acclaimed Indian fashion designer Sabyasachi Mukherjee.

The statement added that the couple would host a reception in New Delhi for relatives on Dec. 21, followed by a celebration in Mumbai on Dec. 26 to be attended by Bollywood stars and cricketers. Afterwards, Sharma will accompany Kohli to South Africa where he will prepare for India’s forthcoming tour there, which is taking place early next year.

The statement added that after spending New Year’s Eve together Sharma would return to Mumbai in the first week of January to resume her acting commitments. They will live in the Worli district of Mumbai, the home of India’s Hindi film industry, it said.

The pair, dubbed “Virushka” by Indian media, is one of the highest profile couples in star-obsessed India. Kohli is among the world’s highest-paid athletes and a huge star in the cricket-mad nation, and Sharma is one of the top actresses in the country’s multi-billion-dollar film industry.

They started dating in 2013 after they met during the filming of a shampoo advert and made their first public appearance a year later during a football match.

Indian newspapers have been gripped by their four-year relationship, which included a reported break-up in early 2016, and rumors of their impending nuptials started swirling recently. They were triggered when Kohli pulled out of India’s limited-overs matches against Sri Lanka and Sharma also ducked out of her busy acting schedule in December.

Then last week Sharma and her family were seen at Mumbai’s international airport, apparently heading for a European destination.

Kohli has smashed numerous records throughout his illustrious career and recently became the first batsman to score six double Test centuries as a captain.

Sharma’s film credits include hit movies Sultan and PK. She won a national Filmfare Award for her role in Jab Tak Hai Jaan (As Long as I Live).

Indian TV channels billed their vows as the “wedding of the year.”

Stars from the world of Bollywood and cricket were quick to congratulate the new husband and wife. “Many congratulations to @AnushkaSharma and @imVkohli on their wedding. God bless and welcome to the club!” tweeted actor Abhishek Bachchan who is married to actress and former Miss World Aishwarya Rai. “Congratulations and best wishes to the just married @imVkohli and @AnushkaSharma. You both look wonderful together. #Virushka,” Indian cricket legend Sachin Tendulkar wrote on Twitter.