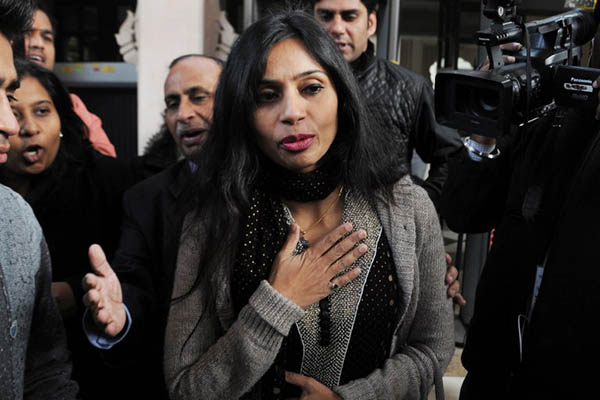 Devyani Khobragade cannot return to the U.S. without surrendering to court on arrival.

An Indian diplomat at the center of a bitter row with the United States told Sunday of her “immense stress” at leaving behind her young family in New York, and vowed to clear her name.

Indian consulate official Devyani Khobragade was allowed to leave the United States on Friday after a month-long dispute over her arrest and strip-search on suspicion of visa fraud involving her domestic servant. Khobragade was granted full diplomatic immunity and allowed to fly back to India—just hours after charges were filed in court alleging she lodged false documents to obtain a visa for her servant and then underpaid her.

Khobragade, 39, told an Indian newspaper of her anguish at leaving behind her daughters, aged seven and four, in New York along with her husband, a U.S. citizen, who works as an academic. “I wonder if I will be able to ever reunite with my family, my husband, my little kids. I miss them,” Khobragade told The Sunday Express. “What if my children choose to study and work in the U.S.? What if I can never return to the U.S., which I cannot now. Does it mean we will never be able to live together as a family again?” she said. “I know I am honest, and I will come out clean. But we do not know how much time it will take and for how long my family will have to suffer due to this,” she added.

Her arrest on Dec. 12 outside her children’s school and treatment in custody, where she said she was subjected to a cavity search, outraged India, which claimed she benefited from full diplomatic immunity. U.S. prosecutors disputed this, and filed charges in New York accusing Khobragade of sometimes forcing the Indian maid to work 100-hour weeks, even when sick, and often without a day off, for pay as little as $1.22 an hour.

Khobragade did obtain diplomatic immunity when last week New Delhi asked Washington to grant her a G1 visa given to diplomats at India’s U.N. mission, which is also in New York.

The row between the two countries, which had embraced each other as strategic partners, saw weeks of feisty exchanges that strained bilateral ties and left resentment on both sides. India has removed extra security barriers at the U.S. embassy in New Delhi, demanded contract details for domestic staff employed by American diplomats and even stopped the mission importing duty-free food and alcohol. On Wednesday, it ordered an embassy leisure center popular with American expatriates in the capital to stop admitting non-diplomatic members, while scheduled visits by U.S. officials to India have been cancelled.

In a fresh retaliatory measure late Friday, India asked the United States to withdraw an embassy official in New Delhi. The expelled American diplomat was a “similar rank” to Khobragade and is thought to have helped the family of her maid travel to America where they were granted protection by prosecutors. U.S. prosecutors say the family of the maid were evacuated to the United States because of attempts to intimidate them.

In her newspaper interview, Khobragade said she would continue a legal fight to clear her name, including attempting to have her case in New York officially dismissed in a federal court. “I have come to India but my stand still needs to be vindicated. And of course, I have been separated from my family, and I am under immense stress for my children,” Khobragade said. “I spoke to my kids for hours last night, and they are already missing me. The four-year-old asked me, ‘Mommy, when will you be back home,’ and I had no answer.”

She cannot return to the United States unless she surrenders to the court on arrival, and her name is being placed on U.S. immigration watch lists “to prevent the routine issuance of any future visa,” according to U.S. officials.

(Jan 8 ‘14) A professor of philosophy at New York’s Baruch College once sat down opposite me in Au Bon Pain café in Harvard Square and the first words he said to me were “Maybe you are an Avatar”. Was there something so extra-ordinary in my appearance that made him say that? Others have said similar things. In view of the paragraph below, what they say seems to have some merit. Let us take what they say seriously. Let the word go out that Satish Chandra is an Avatar (Incarnation) and India’s legitimate ruler. Let the Congress, BJP and AAP match that! (Jan 9 ‘14) A couple hours after I sent the above, a post on Bharat-Rakshak said “There is indeed a God looking after India”. Well, you have to obey God, sing his praises and celebrate the life of an Avatar. This Avatar has already said that Americans deserve to be killed as ruthlessly as fecal bacteria; you are yet to arrest American consular staff — and ambassador — who helped someone with criminal charges against him flee Indian justice. There is an absolute ban on Bharat-Rakshak against taking the name of this Avatar or singing his praises. This is no way to win God’s favor./ Immediately upon my reference to arresting the American ambassador, the Americans gave diplomatic immunity to the Indian diplomat and let her fly home the same day (Jan 9 ‘14). Now let us deal with the Americans’ crimes against this Avatar (paragraph below).

The United States has successfully delayed by about thirty years the development of India’s cryogenic engine — a tiny example of incomparably greater sabotage: “”India’s greatest scientist and greatest living Indian publicly tortured in Harvard seminar, systematically and totally starved for up to 3 weeks at a time, made semi-starved and homeless and even blind for years, kept under 24-hour audio and video surveillance as well as surveillance of [and interference with] communications and electrical typewriter and computer use, document creation and photocopying, etc., by satellite for more than past 3 decades, systematically harassed and in poverty and neutralised and robbed of his work at the cost of hundreds of millions of dollars per year, robbed of crores in his money and property in India by C.I.A.-RAW, forced back into exile in the U.S., all with full cooperation and participation of India’s RAW and India’s C.I.A.-RAW-controlled prime ministers, politicians and media — to keep India poor, weak and enslaved” and how this means the nuclear destruction of New Delhi and then the coast-to-coast destruction of the United States; see my blog titled ‘Nuclear Supremacy For India Over U.S.’ which can be found by a Yahoo/Google search with the title; my biography can be found in Marquis’ Who’s Who in the World, 2014 and earlier editions.” One nuclear explosion on Ramlila Grounds where the uninformed masses gather by the hundreds of thousands at the rallies of Kejriwal, Modi, etc. will take care of their popular support but, instead, one nuclear explosion on RAW headquarters and one on South Block – North Block will destroy traitors, including Kejriwal, sponsored by CIA-RAW while it suppresses Satish Chandra who can make India the supreme military and economic power in the world immediately by destroying Washington and New York simultaneously with RAW headquarters, South Block and North Block with a warning that additional U.S. cities will be destroyed if there is any retaliation or sign of retaliation; his proposal about money will make India the most prosperous nation in the world within about ten years but it will be militarily dominant immediately on the destruction of Washington and New York and will be able to dictate in economic matters also immediately on the destruction of Washington and New York such as by having Americans work as slave labor for India — although the coast-to-coast destruction of the United States will take precedence over having Americans work as slave labor; I have shown that Americans deserve to be killed as ruthlessly as fecal bacteria. With its nuclear warheads emplaced in Washington, New York and other U.S. cities, India has the means right now to make all U.S. presidents — past and present — present themselves in India to be whipped and hanged, by warning that Washington and New York will be destroyed if the U.S. fails to obey and additional U.S. cities will be destroyed if there is any retaliation. Filthy niggers of the Indian government such as the Commerce and Industry Minister and the Foreign Minister insist on putting “the extremely valuable partnership” with the United States above all else; they have a partnership with the United States in raping Mother India — they pull apart and hold open the entrances to the cavities of Mother India which the United States then rapes. They deserve death even more than Ratan Tata about whom I wrote: “Ratan Tata should be whipped and hanged for giving $50 million to Harvard University where the world’s greatest scientist was publicly tortured for being an Indian and to keep India poor, weak and enslaved”. I have described — IndiasLegitimateRulerSatishChandraDOTblogspotDOTcom — the war waged with the help of 24-hour satellite surveillance for the past 37 years against the only Indian who is an obstacle to the Americans’ rape of India.