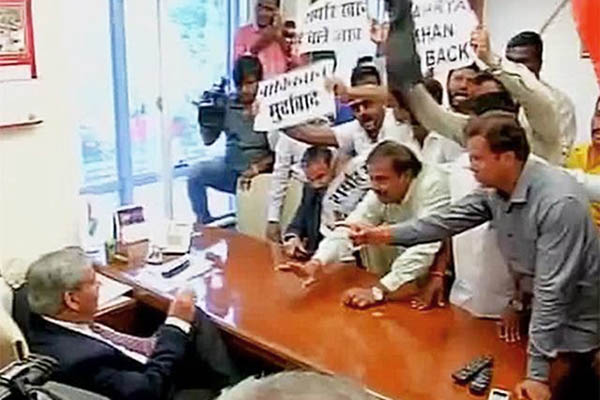 Scheduled talks cancelled, may be held in New Delhi on Tuesday.

Dozens of extremists stormed the Mumbai offices of India’s cricket board on Monday to disrupt planned talks on resuming matches against Pakistan, the latest protest by hardline Hindu activists in the city.

Around three-dozen supporters of the Shiv Sena party barged into the headquarters of the Board of Control for Cricket in India (BCCI) and shouted anti-Pakistan slogans at its president, Shashank Manohar.

“Six people are being held in custody and we are registering an offence of rioting,” said Mumbai Police Deputy Commissioner Dhananjay Kulkarni. “Thirty-five were involved so we are looking to arrest a few more,” he added.

The protesters demanded that Manohar cancel talks with Pakistan Cricket Board (PCB) Chairman Shahryar Khan that were planned in Mumbai on Monday. Khan arrived in the city on Sunday to discuss the possibility of an India-Pakistan series, which has run into doubt over strained relations.

Local media reported that the talks would instead be held on Tuesday in New Delhi, but there was no official confirmation from the BCCI.

India and Pakistan have been bitter rivals since gaining independence from Britain in 1947 and have fought three wars. The rivals have not played a Test match since Pakistan toured India in 2007.

Pakistan are due to host India for a full tour in the United Arab Emirates in December—one of six series the rivals agreed to play between 2015 and 2023 under an agreement signed last year—pending New Delhi’s clearance. But relations between the South Asian nuclear rivals have been strained, with continued border ceasefire violations from both sides, leading to the cancellation of a meeting between their security advisers in August.

Monday’s protest came a week after Shiv Sena activists threw ink over the organizer of the launch in Mumbai of a book by a former Pakistani foreign minister.

The Shiv Sena, a junior partner in a ruling coalition with the Bharatiya Janata Party in the Maharashtra state government, opposes any dealings with Pakistan because of the 2008 terror attacks, which India blamed on militants from across the border. Shiva Sena was earlier this month accused of using threats to force the cancellation of an appearance in Mumbai by Pakistani singer Ghulam Ali.