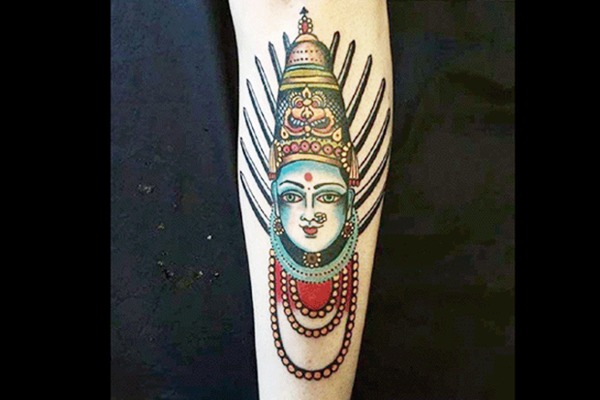 Matthew Gordon was only allowed to go free after he agreed to cover up the body art while he was in India.

Rightwing extremists in India threatened to “skin” an Australian visitor who had a tattoo of a Hindu goddess on his leg, police said Monday, adding they were looking for the culprits.

Matthew Gordon was at a restaurant in Bangalore with his girlfriend on Saturday when around a dozen members of the ruling Hindu nationalist Bharatiya Janata Party began harassing the couple. They said a tattoo of the fertility goddess Yellama on his shin offended their religious sentiments, and ordered him to remove it.

Bangalore deputy police commissioner Sandeep Patil said Gordon told officers at the station that the men had threatened to skin his leg if he did not. “I was relieved to see a policeman, but much to my shock he started to blame me, and said, ‘This is India and we are insulting Hindus’,” Gordon later told The Hindu daily. “He then took me to the station… we were forced to sit there for three hours. They let me go only after I gave an apology saying I will cover this tattoo.”

Tensions between Gordon and the extremists only eased after the 21-year-old tourist wrote a letter of apology addressed to a local police inspector in which he agreed to cover up his tattoo while in India.

However, police said Monday they had obtained CCTV footage of the incident and were taking it seriously. “[We] will act against them [extremists] if they are guilty,” Patil told reporters.

In August a leading scholar who had spoken out against idol worship was murdered in Karnataka state—where Bangalore is located—after receiving death threats from Hindu hardliners.

Gordon, a law student, told The Hindu he had a strong attachment to Hinduism after spending three years in the southern state of Tamil Nadu. He said he had another tattoo on his back of the Hindu elephant god Ganesh that took 35 hours to complete.

“These tattoos mean a lot to me. I’m not sporting them because of their exoticism. I know the mythology and the values of the gods inked on me,” the paper quoted him as saying.

Australia’s High Commission said it was concerned about the incident and was speaking to local authorities.

well another case of hindu extremism ..modi better watch out as its now becoming a regular affair when extremists are wanting to and in some cases taking the law into their own hands. where us shining india..gone for a snooze I say