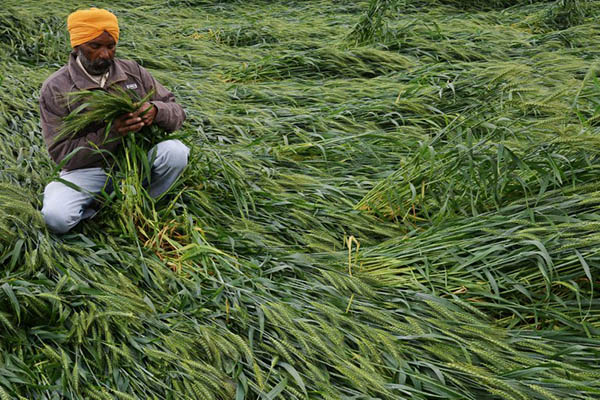 At least 32 farmers have taken their own lives after their crops were destroyed, according to activists.

A string of farmers have committed suicide in western India after freak hailstorms and rains destroyed winter crops worth millions of dollars, activists and politicians said Wednesday.

The unusual weather struck parts of western Maharashtra state, of which Mumbai is the capital, from late February and went on to badly damage crops.

A source from the Maharashtra chief minister’s office said that seven suicides had been confirmed, with more killed by the storm itself, but the opposition and activists said the real figure was much higher. “There have been 32 [farmer] suicides so far across Maharashtra after the hailstorms started … We are getting hourly updates from our people,” said Kishor Tiwari, president of farmers’ advocacy group Vidarbha Jan Andolan Samiti. He said the figure was expected to rise after more post-mortems were carried out.

India’s main opposition group, the Bharatiya Janata Party, said on Tuesday that the number of farmer suicides had gone up to 37, demanding that the natural disaster be declared a “national calamity,” the Press Trust of India news agency reported. “Since the hailstorm began on Feb. 28, the entire rabi (winter-sown) crop on 1.6 million hectares of land in 17 districts has been destroyed,” said senior BJP leader Gopinath Munde.

The region, which usually experiences the tropical rainy season from June to October, saw major damage to crops of fruits such as grape, mango, papaya, lime and watermelon, according to local reports. Among those to commit suicide was debt-ridden Bapu Ramchandra Pawar, 62, who poisoned himself after his pomegranate farm was destroyed, police told PTI.

Chief Minister Prithviraj Chavan has released a statement promising to stand by victims of the storm who suffered “utter distress” from the damage of their crops, which were about to be harvested. He urged those affected not to “take any steps that endanger their lives under such emotional stress.”

Ahead of India’s general elections, which begin next month, the BJP’s prime ministerial candidate Narendra Modi is due to visit the troubled area on Thursday. He is expected to hold a public rally in Vidarbha, a region notorious for its high level of farmer suicides.