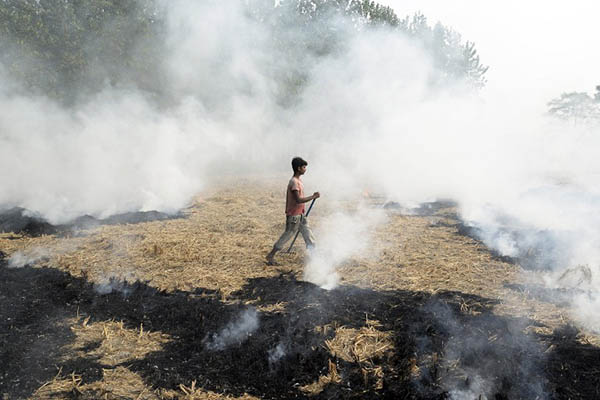 High cost, lack of time blamed for ongoing burning of crop stubble despite it being linked to rise in pollution across South Asia.

As he surveys his acres of charred farmland outside New Delhi, Ishwar Singh has little sympathy for people choking in India’s capital or any reason to stop the fires that are fueling pollution. “Everyone does it and we’ve got no option as we can’t afford to waste time or money clearing our land in other ways,” says Singh. “All those complaining about what we’re doing to our fields don’t know a thing about farming and what people like me have to do to grow potatoes or onions and other vegetables. If we didn’t do it, then what would they eat? What prices would they have to pay? Everything would become massively expensive.”

While there are multiple factors behind New Delhi’s status as the world’s most polluted capital, much of the latest bout of smog has been blamed on the illegal but widespread practice among farmers of burning crop stubble. Attempts to tackle the problem have amounted to little more than hot air as India’s federal system of government makes enforcement a challenge.

Regional-rival Beijing, on the other hand, which competes with Delhi on poor air quality, has managed to stem the tide of pollution by ordering factory shutdowns and cars off the road with ad hoc edicts issued by the ruling Communist Party.

Back in the Indian capital, the city’s government admitted it was struggling to halt the crisis as Delhi Chief Minister Arvind Kejriwal claimed last week that between 15 million to 20 million tons of stubble had been burnt in neighboring states. Kejriwal appealed to the central government, headed by his rival Prime Minister Narendra Modi, to intervene with the state governments to find a resolution to the practice of crop burning.

Hundreds of thousands of farmers who mainly cultivate rice and wheat set fire to their fields after harvest to clear the residue of their primary crops so they can grow vegetables over the autumn on the same land. The practice is particularly intense in the states of Punjab, Haryana and Uttar Pradesh, which serve as Delhi’s breadbaskets.

While Singh’s farm in Haryana is around two hours drive from downtown Delhi, the smoke blown from fields such as his is a primary cause for the toxic smog that has shrouded the city. Levels of PM2.5—the fine particles linked to higher rates of chronic bronchitis, lung cancer and heart disease—have breached the “hazardous” upper limit of 500 several times in Delhi this month.

Stubble burning is technically illegal, but it’s rare for farmers to face more than a token fine. Singh was recently fined 2,500 rupees but he said the local officials who sanctioned him were apologetic and it was a small price to pay for rotating his crops.

Another small farmer, speaking on condition of anonymity as some of his land was still smoldering, said the alternatives were not viable. “I can’t afford machines and if I hired people to clear all the residue, I would have to pay them and lose a week of growing time. Besides, no one does a thing about these big businessmen,” he added, pointing to a nearby processing plant belching out fumes.

The impact of factory pollution and crop burning goes far beyond state boundaries, but authorities are reluctant to take action which might alienate vote banks such as farmers and business leaders.

Both Punjab and Uttar Pradesh hold state elections next year.

The ban on crop burning is rarely enforced and successive court judgments ordering ageing vehicles off Delhi’s roads are also routinely flouted, leading to more unwelcome comparisons with China’s track record. “We have repeatedly failed to implement the laws in India,” said Mahesh Palawat, chief meteorologist at private weather forecaster Skymet. “There is hardly any control on emissions. The number of vehicles is going up and construction still continues across the region.”

“China is using technology and strict implementation because the authorities recognize air pollution as a health emergency and are doing everything to control it. But here in India, there is no political will and laws are never implemented on ground, mostly because no one takes pollution seriously,” he added.

Avin Sharma, who works in Delhi for a multinational corporation, questioned whether authorities really had the stomach to take on the range of vested interests that contribute to the pollution. “There are plenty of laws to deal with violators but they are wasting time by blaming each other,” said Sharma.