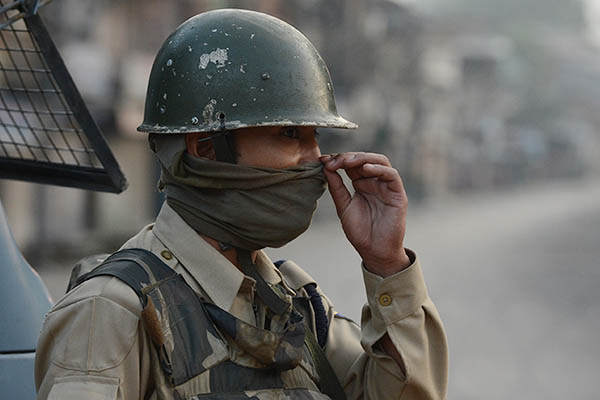 Indian paramilitary forces on Thursday shot dead six people protesting a raid by the troops on a madrassah in Indian-administered Kashmir, police and witnesses said.

Border Security Force troops fired on demonstrators who had gathered outside their headquarters in the district of Gool, two police officers said on condition of anonymity. “It is mayhem. Six are dead and dozens injured. The death toll could rise further,” said one officer.

India’s Home Minister Sushil Kumar Shinde ordered an investigation into the shooting and appealed for calm in the tense Himalayan region.

A revolt against Indian rule has simmered for decades in Indian-administered Kashmir, the country’s only Muslim-majority state. The insurgency has been a regular source of tensions between residents and security forces, which often spill over into violence.

“I have ordered an inquiry to be conducted without any loss of time to ascertain the circumstances leading to the firing,” Shinde said in a statement. “I assure that any use of excessive force or irresponsible action shall be dealt with strictly,” he said. “The loss of life in this incident is particularly saddening,” the minister added, without confirming the number killed.

Protesters clashed with troops after an incident on Wednesday evening at the madrassah attached to a mosque in Gool, witnesses said. The head of the madrassah, Qari Shabir, said four BSF troopers came in looking for militants, at the same time that a caretaker was alone there reciting prayers for Ramzan.

“They beat him up … that is when Abdul Lateef [the caretaker] raised an alarm and people started to assemble and the word spread,” Shabir said by telephone from Gool. Shabir added that he later went to the madrassah and saw copies of the Quran strewn on the floor before security authorities sealed the premises.

Other local residents said the troops had entered the mosque to complain about the loud recitation of prayers by worshippers during Ramzan.

The angry protesters clashed outside the BSF base on Thursday with troops who started firing, witnesses said. “The BSF soldiers fired indiscriminately, downing protesters left, right, and center,” one witness who declined to be identified said by telephone.

A top BSF officer said troops only opened fire when a “mob attacked” the base where arms and ammunition were stored, adding that one soldier was injured. “We are a professional force. We respect all the tenets of all religions,” Rajeev Krishan, inspector-general of the BSF, told reporters in Jammu.

Omar Abullah, the state’s chief minister, warned that the “ghastly incident” risked igniting wider unrest. “It is highly unacceptable to shoot at unarmed protesters just because they were reportedly protesting manhandling of an imam of their area,” Abdullah said in a statement. “This shocking act warrants and demands the severest of condemnation in the strongest possible terms.”

In a separate incident on Thursday, suspected rebels shot dead two policemen who were bodyguards of a top cardiologist, near the doctor’s home in the town of Pampore. “Three terrorists attacked and injured the doctor while he was walking toward a car along with his bodyguards who laid their lives on the spot,” said Abdul Gani Mir, Kashmir’s police chief.