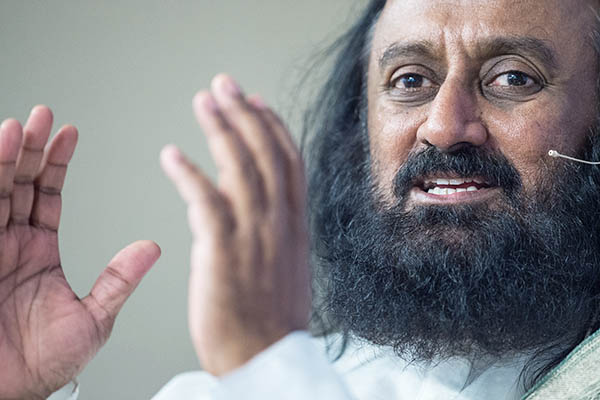 Sri Sri Ravi Shankar claims the only way to defeat the Taliban in Pakistan is through dialogue.

Indian guru Sri Sri Ravi Shankar’s efforts to encourage peace in Pakistan ended in an armed attack, but he still believes dialogue is the best path with the Taliban.

The globetrotting yogi, known for his flowing hair and beard and perpetually sunny disposition, had brought his Art of Living Foundation to Pakistan in 2004 in hopes of encouraging stress relief through breathing exercises and non-denominational meditation.

Armed gunmen burned down the center in Islamabad in March after charges by some in Pakistan that yoga, rooted in the spiritual history of India, conflicted with Islamic values. But Shankar said that he remained convinced that dialogue was the best way to handle the Taliban. He voiced concern over the Pakistani military’s offensive in North Waziristan where nearly 370 militants and 12 security personnel have died.

“Annihilation of them is not the way. Dialogue is the way,” said Shankar, clad as always in white robes, on a visit to Washington. The military campaign “will only cause more bitterness. Violence can only bring more violence,” he said.

Shankar declined to discuss future plans of the Art of Living Foundation in Pakistan, citing concerns for practitioners on the ground. But he encouraged more Pakistanis to speak up for non-violence. “I cannot go and do anything in Pakistan. People in Pakistan should fight against, should stand up against terrorism,” he said.

The guru has also taken his peace campaign to Iraq where in 2007 he met Prime Minister Nuri al-Maliki and encouraged reconciliation among Shias, Sunnis and Kurds. The Art of Living Foundation brought young Iraqis to India for training as “peace ambassadors.”

Shankar voiced fear that Iraq has since lost the chance for peace. Sunni extremists in recent weeks have launched an offensive against Maliki’s Shia-led government that has killed nearly 1,100 people. “It is very gloomy, very gloomy. We have lost a very good opportunity to unite after the war,” he said. “The divide and mistrust has gone, I think, beyond repair. But still I hope for some miracle.”

Shankar, once ranked by Forbes magazine as India’s fifth most powerful person, is close to new Prime Minister Narendra Modi whom he has joined in meditation.

While stopping short of explicitly endorsing him in the election, Shankar defended Modi against charges of responsibility for anti-Muslim riots as leader of the state of Gujarat in 2002. In Washington, Shankar said that the new prime minister in fact had a “soft heart.”

Shankar, on a tour of the United States, came to Washington to speak at the conservative American Enterprise Institute, the home to hawkish figures from president George W. Bush’s administration. The think tank recently has put a focus on spirituality, inviting the Dalai Lama in February.

Speaking to a packed crowd at the think tank on Tuesday after an all-vegetarian lunch buffet, Shankar called for the United Nations to ask schools to teach students a bit about all of the world’s religions. Much like vaccinations against diseases, the United Nations could require all countries to have such broad education to reduce the allure of fanaticism, he said. Such global educational standards, he said, would be like a “vaccination against terrorism.”

Only spirituality can make a difference.. true!

we can talk to our own people for peace and dialogue but not to the foreign terrorists, like uzbeks,arabs,chinese,tajiks and many more who on the behest of india,us,afghanistan and israel want to weaken Pakistan both economically and militarally.

It is high time that UNO come forward and take initiative to implement reforms in education system as advised by Sri Sri by all countries . Enriching moral values by bringing out good tenets of all the religions and making them available to all people of the world is perhaps the only viable solution to combat growing fanaticism in the world.

that is the reason, millions & millions across the globe call “Jai Gurudev”