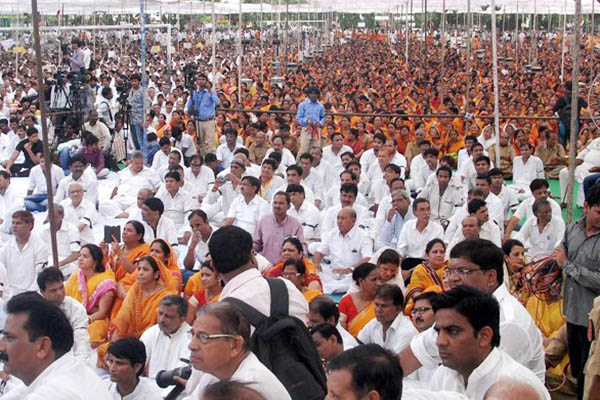 Thousands of members of the austere Jain religion protested across India on Monday for the legal right to take part in an ancient ritual of starving themselves to death.

Dressed in traditional white kurtas and trousers and holding banners that read “Suicide is crime. Santhara is religion,” they marched silently through the city of Jaipur in the western state of Rajasthan.

Jains have been campaigning after a Rajasthan High Court ruled this month that their voluntary custom of fasting until death or Santhara was a form of suicide, which is illegal under Indian law. “Our peaceful protest is against the judgment pronounced by the high court without understanding the concept and objectives” of the tradition, Jain leader Rajendra Godha said.

Godha said up to 100,000 devotees took part in the protest that snaked through Jaipur for several kilometers and also saw schools and businesses run by Jains close for the day. Additional deputy commissioner of police Gyanendra Singh put the protest numbers much lower, at between 35,000 and 40,000.

Smaller protests were also held in other cities including in Mumbai, where an AFP photographer said several thousand gathered peacefully under a tent to hear speeches by two priests.

Jain leaders have said they will appeal to the Supreme Court against the lower court’s ruling, saying the decision was against their religious right, which is enshrined in the constitution.

As part of their religion, Jains can take a vow to give up food and water as a way of embracing death. It is unclear how many deaths occur every year but local media put the number at a couple of hundred.

The high court was ruling on a petition by an activist in Rajasthan who argued the practice was against the law. He questioned whether elderly Jains were being encouraged to take the vow to free families of the burden of taking care of them, an argument Jains deny.

A Hindu-majority country, India is also home to large numbers of religious minorities including 4.2 million Jains, according to 2011 census figures.

Jainism is thousands of years old, a nonviolent religion whose philosophical roots are based in ancient India and are inspired by the same principles of tolerance that influenced freedom fighter Mahatma Gandhi.