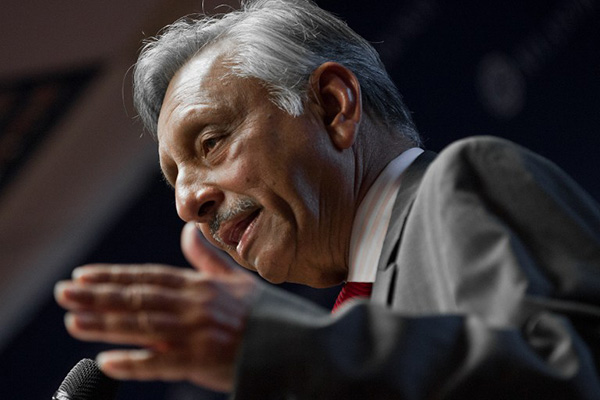 A senior lawmaker from India’s ruling Congress party said Monday that Pakistan’s historic animosity toward New Delhi was fading and called for his country to change its own attitudes.

Aiyar, a diplomat turned politician known for his dovish views, said he saw a shift as Pakistanis who remember the subcontinent’s partition in 1947—and defined their identity accordingly—grew older.

Aiyar, speaking on a visit to Washington, D.C., said that Pakistanis had increasingly suffered themselves from violence by extremists and that the neighboring country had economic and cultural interests in better ties. “The visceral anti-Indianism of a previous generation is almost out of the picture now and will be totally out of the picture about the time that they lower me into the grave,” Aiyar, 72, said at the Atlantic Council think tank. He said that “nothing similar has happened in India,” which has fought three full-fledged wars against its neighbor since independence.

“There is a kind of clinging to the belief that since the Pakistanis have been hostile in the past, they are necessarily hostile now, and therefore Indians should behave like housewives who heard on the radio that a convict has escaped for the nearby jail and start putting up more and more barricades.”

His optimism comes despite concerns by India and the United States over extremist groups in Pakistan such as Lashkar-e-Taiba, which investigators blamed for the November 2008 siege of Mumbai that killed 166 people.

Aiyar, who was close to slain former prime minister Rajiv Gandhi, said that India should pursue “uninterrupted and uninterruptible” dialogue with Pakistan to deprive extremists of one perceived benefit of launching attacks. He praised overtures by Pakistan’s incoming prime minister Nawaz Sharif, while conceding that Sharif’s record on anti-India violence “is not a very happy one” during his previous two stints in office.

But Aiyar said that Sharif apparently believed that building a better relationship with India “will pay him huge domestic political dividends.”

Sharif likely sees “that the best way of doing this is not to take the Lashkar-e-Taiba on absolutely upfront, but to try and restrain them” and stop support to the group from within the Pakistani state, Aiyar said.

India also needs to create a conducive environment of friendship with its neighbours for a better and prosper future of region. Whereas Pakistan needs to tackle extremists group that not only pose threats to India but also to Pakistan. Here, in Pakistan, anti-India sentiments are fading rapidly and a positive response from India is necessary for the continuity of these feelings..