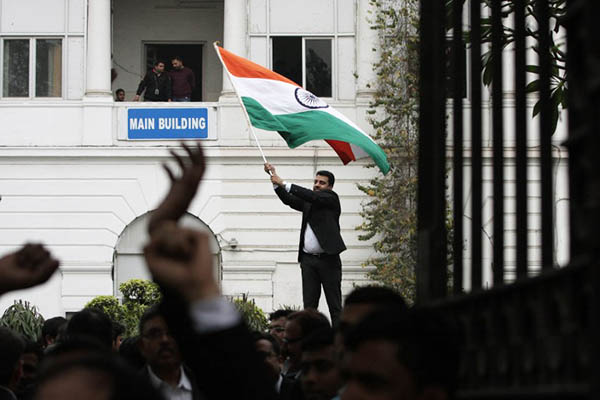 Rightwing lawyers claim they will continue to attack ‘anti-nationals’ regardless of consequences.

Hundreds of lawyers marched through the streets of New Delhi on Friday, pledging to attack anyone found to be “anti-national,” after some were accused of assaulting a student arrested for sedition.

Student leader Kanhaiya Kumar’s arrest over a rally at which anti-India slogans were shouted has triggered a week of mass protests, in an escalating row over freedom of speech in the world’s largest democracy. In a brazen show of strength, lawyers wearing black courtroom robes marched past the iconic India Gate monument in New Delhi Friday waving the Indian tricolor and shouting nationalist slogans in counter-protest.

They defended outbreaks of violence at court hearings earlier in the week that saw rightwing lawyers attack 32-year-old Kumar as he entered the court and stones thrown at journalists covering the case. “We will keep attacking the anti-nationals no matter what,” one protesting lawyer was quoted by Press Trust of India as saying. “We will not tolerate any insult to our motherland. Let police issue summons against us,” the lawyer said.

Lawyers for left-wing student leader Kumar had applied for bail at the Supreme Court fearing a repeat of the chaos of earlier in the week. But on Friday the court kicked the hearing to the lower Delhi High Court, where it was then postponed.

“There was an issue with paperwork and the bail application will likely be heard on Monday [by the Delhi High Court],” a member of Kumar’s legal team told AFP.

Kumar was arrested on Feb. 12 after a rally at Delhi’s prestigious Jawaharlal Nehru University called to mark the 2013 hanging of Kashmiri separatist Mohammed Afzal Guru over a deadly 2001 attack on the Indian parliament.

Former Delhi University lecturer S.A.R. Geelani, who was arrested in connection with another event marking Guru’s death, was ordered to remain behind the bars till March 2, his lawyers told AFP Friday. He had applied for bail at Patiala House Court in Delhi.

Kumar, in judicial custody since Wednesday, has denied shouting anti-India slogans and so has Geelani. Some rights campaigners say the Hindu nationalist government is using the British-era sedition law to clamp down on dissent.

Protests against Guru’s execution have regularly been held in Kashmir, where many believe he was not given a fair trial. Guru always denied plotting the attack, which was carried out by Kashmiri militants. Sedition charges have been used in the past against supporters of independence for the disputed territory of Kashmir, which is divided between India and Pakistan and claimed in full by both.