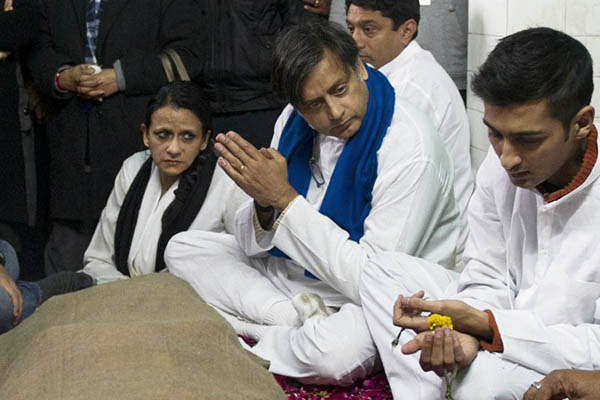 Shashi Tharoor’s private secretary says his employer is in a state of shock and wants the truth behind the death revealed as soon as possible.

Indian minister Shashi Tharoor, whose wife was found dead in a luxury hotel room, called Sunday for a swift inquiry so the truth “can come out as soon as possible,” an official said.

Tharoor wrote to the home minister on Sunday, saying: “He was horrified to read the reckless speculation” about his wife’s death, which came after she exposed his alleged adultery with a Pakistani journalist on Twitter. Tharoor, a former U.N. diplomat, pledged his “full and unstinting cooperation” with investigations into what doctors have described as his wife’s “unnatural, sudden death” on Friday evening.

“Mr. Tharoor has requested the home minister to expedite the inquiry so that the truth behind his wife’s death can come out as soon as possible,” said Tharoor’s private secretary Abhinav Kumar. “He is in a state of shock. He is anxious and keen to know the truth … what happened that day, no one can say.”

Tharoor, 57, the junior human resources development minister, found his wife Sunanda Pushkar dead in her five-star hotel room in New Delhi after he returned from a party meeting. The death was a tragic twist in a tale of apparent marital strife that has played out in full view of the public in India’s newspapers and on social media.

Pushkar, 52, died an “unnatural, sudden death,” said doctors who performed an autopsy on Saturday, adding that more tests were needed to determine the exact cause. Newspapers have devoted pages of coverage including speculation on whether she committed suicide as well as the state of their marriage.

In his letter, quoted by the Press Trust of India news agency, Tharoor said: “In the midst of my mourning, I have finally had a chance to catch up with the media reports and am horrified to read the reckless speculation rampant there. I pledge full and unstinting cooperation. Nothing short of the truth will end the indignity to which my wife and I are being subject at a time when all I seek is to be allowed to grieve in private with her and my near and dear ones.”

A magistrate charged with investigating Pushkar’s death is expected to record Tharoor’s statement after he scatters his wife’s ashes on Monday, said Kumar.

Tharoor will travel to the holy town of Haridwar for the ceremony after her body was cremated according to Hindu rites on Saturday, Kumar said. The final autopsy report is expected to be handed to authorities on Monday.

Events began unfolding Wednesday when curious messages appeared on the Twitter account of the thrice-married Tharoor, who is also a novelist and government spokesman and a prolific tweeter. They showed private exchanges purportedly between the 57-year-old minister and Pakistani journalist Mehr Tarar, in which she appeared to profess her love for him and he said his wife had discovered their relationship.

Tharoor quickly responded by saying his Twitter account had been hacked, but Pushkar told two newspapers that she was the author of the messages.

Seeking to draw a line under the Twitter row, Tharoor issued a statement Thursday in which he blamed unauthorized tweets and distorted media reports for the “unseemly controversy.” The statement said the couple were “happily married.”

The Pakistani journalist whom Pushkar accused of “stalking” her husband strongly denied having a relationship with the former U.N. diplomat. Reacting to Pushkar’s death, Tarar tweeted that she was “absolutely shocked. This is too awful for words.”

Pushkar, who had been suffering from tuberculosis, went on television on Thursday, appearing confused and apparently unaware she was talking live. An anchor on the CNN-IBN channel, Sagarika Ghose, said Friday she had spoken privately to her earlier in the day and she appeared depressed and was sobbing uncontrollably.