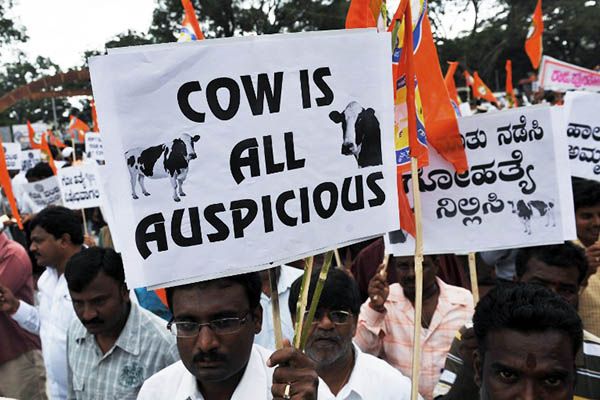 Two Muslim men were beaten to death by stick-wielding Indian villagers who suspected them of stealing cows, police said on Monday, the latest such attack over the animal Hindus consider sacred.

Police in northeastern Assam state’s Nagaon district said they had registered a murder case over the deaths of Abu Hanifa and Riyazuddin Ali on Sunday. Two suspects have been detained for questioning. “They were chased and beaten with sticks by villagers who said the two boys were trying to steal cows from their grazing field,” Debaraj Upadhyay, Nagaon’s top cop, told AFP by telephone. “By the time we took them to the hospital at night they had succumbed to their injuries,” he added.

Footage shot by local onlookers and aired by Indian broadcasters on Monday showed the two badly beaten victims cowering with their hands tied as villagers surrounded them. The incident comes amidst a wave of rising tensions over the killing and smuggling of cows in Hindu-majority India, where the animal is considered sacred and its slaughter is a punishable offence in many states.

There have been a spate of attacks in recent months by ‘cow protection’ vigilante groups, who roam highways inspecting livestock trucks for any trace of the animal. Last month a Muslim man was beaten to death by a mob in Rajasthan state after they discovered cows in his truck. The man was a dairy farmer transporting milk cows. In both that incident and Sunday’s mob beating police were accused of failing to act quickly enough to protect the victims.

In the Rajasthan attack, in which 200 vigilantes set upon trucks transport cattle along a highway, police first arrested 11 of those beaten for alleged permit violations instead of rounding up the perpetrators.

Upadhyay rejected suggestions that police had reacted too slowly to Sunday’s incident, saying his officers rescued the pair and rushed them to a hospital, where they later died. He also dismissed speculation that a vigilante group or association was involved in the attack.

Critics say vigilantes have been emboldened by the election in 2014 of Prime Minister Narendra Modi’s Hindu nationalist Bharatiya Janata Party. Last year Modi criticized the cow protection vigilantes and urged a crackdown against groups using religion as a cover for committing crimes.

At least 10 Muslim men have been killed in similar incidents across the country by Hindu mobs on suspicion of eating beef or smuggling cows in the last two years. Most Indian states have banned cow slaughter and imposed heavy penalties and jail terms on offenders, while the transportation of cattle across state lines is also barred in several jurisdictions.

In a renewed effort to protect against cow smuggling, the government plans to issue millions of cows with unique identification numbers linked to a national database.