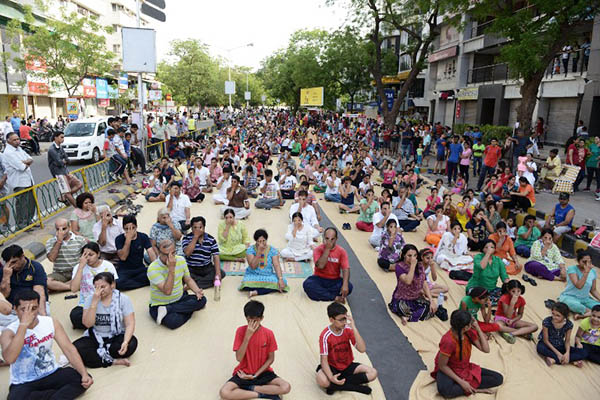 Ayush ministry clarifies its directive to commence Yoga Day with chants of ‘Om’ are not compulsory.

The mass outdoor yoga session, to be held in June for its second year, is an initiative spearheaded by Prime Minister Narendra Modi, who is seeking to reclaim the practice as an historic part of Indian culture. “Yogic practice shall start with a prayer or prayerful mood to enhance benefits of the practice,” read a note issued by Ayush ministry, which works for the promotion of yoga, as shown by television networks.

The ministry said participants should chant the sacred sound “Om” and Hindu vedic hymns at the start and end of the 45-minute event on June 21.

Muslim groups reacted with anger, saying such chants were against their faith and accusing the ruling Bharatiya Janata Party of seeking to impose a hardline Hindu agenda. “We are not against yoga but India is a secular country and the state has no religion,” said Zafaryab Jilani, a member of the All India Muslim Personal Law Board. “If they are imposing a Hindu religious practice on the rest of us, it is unconstitutional.”

The government waded into a similar controversy last year after it made the surya namaskar pose (sun salutation) part of the event.

Muslim groups say certain yoga poses and chants have clear Hindu overtones and are against Islam. “They are again and again trying to impose a Hindutva agenda. This order should be cancelled immediately,” Khalid Rashid Firangi Mahali, a top Muslim cleric said.

The opposition also weighed in, accusing the government of seeking to impose a narrow vision on the ancient tradition, which commands huge global popularity. “Yoga has achieved the status of an international art form and by imposing such conditions the government is killing its essence,” Manish Tewari, a leader of the main opposition Congress party said. “People from different religions do it and the practitioner should decide what to chant.”

Following the outcry, the Ayush ministry issued a clarification saying the directive was not compulsory.

Indian scholars believe yoga dates back 5,000 years, based on archaeological evidence of poses found inscribed on stones and references to Yogic teachings in the ancient Hindu scriptures of the Vedas. In 2014 the United Nations accepted India’s proposal to declare June 21 as International Yoga Day, highlighting its health benefits.

Thousands gathered in dozens of cities around the world to celebrate the inaugural event last year, with U.N. Secretary-General Ban Ki-moon performing yoga at Times Square in New York.