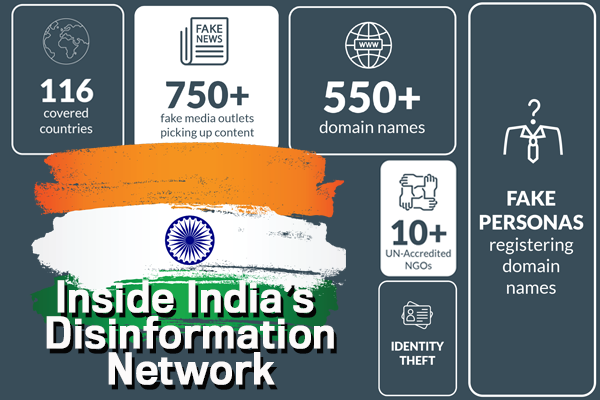 The Indian Chronicles report, spanning 89 pages, says a network of coordinated NGOs serving Indian interests have abused the U.N. Human Rights Council for the past 15 years. “Indian Chronicles resurrected dead media, dead think-tanks and NGOs. It even resurrected dead people. The actors behind this operation hijacked the names of others and tried to impersonate regular media and press agencies such as the EU Observer, The Economist, and Voice of America. They used the letterhead of the European Parliament; registered websites under avatars with fake phone numbers; and provided fake addresses to the United Nations,” it says.

It noted that some of the organizations involved would organize purportedly “multi-stakeholders events” but would only include speakers tied to them. “They used layers of fake media that would quote and republish one another. They used politicians who genuinely wanted to defend women or minority rights to ultimately serve geopolitical interests, and gave a platform to far-right politicians when their objectives converged,” it added.

The report narrated how a closer look at Commission to Study the Organization of Peace revealed how the U.S.-based NGO—accredited to the U.N. Economic and Social Council—had become inactive in the late 1970s before being resurrected in 2005. “Its identity had been hijacked by the same actors depicted in our first investigation,” it said, adding that, miraculously, its former chairman Louis B. Sohn, who died in 2006, had seemingly attended a UN Human Rights Council meeting in 2007 and participated in an event organized by “Friends of Gilgit-Baltistan” in Washington D.C. in 2011.

That revelation, it said, led it to uncovering an “entire network” of coordinated U.N.-accredited NGOs that were repeatedly promoting Indian interests and criticizing Pakistan. “We could tie at least 10 of them directly to the Delhi-based Srivastava family, with several other dubious NGOs pushing the same messages,” it said.

According to the report, Srivastava-linked organizations organized trips for members of the European Parliament to Kashmir, Bangladesh and the Maldives. It said the actors orchestrating the network were directly, and opaquely, tied to the creation of three informal groups in the European Parliament, the South Asia Peace Forum, the Baloch Forum, and Friends of Gilgit-Baltistan.

“They have organized press conferences and events within and in front of the European Parliament,” it said, adding that organizations like the Women Economic and Social Think-Tank had drafted and suggested parliamentary questions to the European Commission, along with articles for “fake E.U. magazines such as EP Today.”

It said the visits and NGO discussions “served as a honeypot” to encourage lawmakers to participate in a pro-India and anti-Pakistan discourse through minorities’ and women’s rights issues. “This is how we uncovered EU Chronicle,” it said of a new fake media outlet with fake journalists supposedly covering European affairs. “In less than 6 months of existence, already 11 MEPs have written or endorsed op-eds at a remarkably high pace for EU Chronicle,” it added.

The EU Disinfolab report said Indian press agency Asian News International was directly involved in spreading the fake media, saying it often quoted dubious op-eds as genuine articles. “The coverage—and often distortion—by ANI of the content produced in Brussels and Geneva led us to the Big News Network and the World News Network—and entire network of 500+ fake local media in 95 countries that have helped reproduce negative iterations about Pakistan (or China),” it said, noting this details how the activities of fake NGOs and fake specialized media can be “repackaged, distorted and amplified by malicious actors to influence or disinform globally, using loopholes in international institutions and online search engines.”

According to the investigation, 10 U.N.-accredited NGOs—the International Institute of Non-Aligned Studies; the Indian Council of Education; Commission to Study the Organization of Peace; the International Club for Peace Research; World Environment and Resources Council; United Schools International; Center for Environmental and Management Studies; Canners International Permanent Committee; Pan-African Union for Science and Technology; International Association for Democracy in Africa—were directly controlled by the Srivastava Group and were all “resurrected” from defunct NGOs.

It said the Indian network benefited from the track record of these organizations while pushing an agenda of discrediting Pakistan and promoting Indian interests at U.N. conferences and hearings.

EU Disinfolab said the people responsible for fake media outlets EP Today and EU Chronicle had registered 550+ domain names of NGOs, think-tanks, media, European Parliament informal groups, religious and Imam organizations, obscure publishing companies and public personalities. “A non-negligible proportion of domain names were bought in the context of the cyber-warfare with Pakistan, to cyber-squat on domains that Pakistan might later wish to use,” it noted.

It said that during its 15-year operation, the Indian network had supported:

The report warned that the disinformation operation was ongoing. It claimed its long-term objectives appeared to be reinforcing pro-Indian and anti-Pakistan and anti-China feelings within India. “Internationally, to consolidate the power and improve the perception of India, to damage the reputation of other countries and ultimately benefit from more support from international institutions such as the E.U. and the U.N.,” it added.

The Indian Chronicles is a follow-up to last year’s EU DisinfoLab investigation, which uncovered a network of 265 coordinated fake local media outlets in 65 countries serving Indian interests, as well as multiple dubious think tanks and NGOs. That network, active in Brussels and Geneva, was producing and amplifying content designed to, primarily, undermine Pakistan.