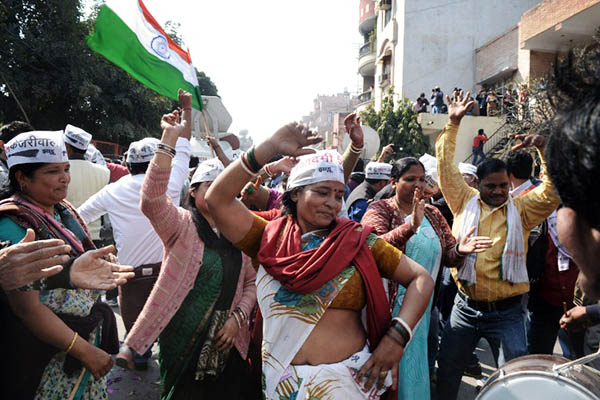 Analysts said the result was a blow for a prime minister who has enjoyed an extended honeymoon with voters since his landslide general elections victory.

Kejriwal’s win marks a stunning comeback for the anti-graft champion and self-styled anarchist, who resigned following a chaotic 49-day spell in charge of the Delhi state government a year ago. “Thanks for the unprecedented victory,” Kejriwal, a former tax official-turned politician, told hundreds of cheering supporters outside AAP headquarters in Delhi. “But it’s very scary, the kind of support the people of Delhi have extended and the mandate we have been given, I appeal to the AAP workers and leaders not to be arrogant,” Kejriwal said, as supporters showered him in petals.

After apologizing this month for leaving voters without an elected government for a year, Kejriwal was the star of the election campaign, outshining a former policewoman who was the BJP’s pick for chief minister. Rattled by Kejriwal’s popularity, Modi headlined several major rallies, portraying his rival as a “back-stabber” who betrayed voters last time round by quitting so early.

But Kejriwal’s pledges to tackle entrenched corruption and lower utility bills won over legions of working-class voters willing to give him a second chance. He will be sworn in as chief minister on Saturday.

Congress, which has dominated politics since India’s independence, suffered another mauling after being thumped at the general elections, winning no seats.

AAP supporters massed in the streets, dancing, singing and waving national flags along with ones picturing Kejriwal. “Kejriwal represents pure hard work, dedication. He focuses on doing the ground work first, not just making tall claims,” school basketball coach Sukhdarshan Singh said. Poulomi Gupta, a 36-year-old accountant, said Kejriwal was a “hero” for the common man. “It’s not about money or fame for him. He’s put everything on the line for people like you and me and everyone else here,” he said.

However, the BJP, which won 31 seats out of 68 the last time around, managed to keep its share of the vote intact at 32.2 percent. In 2013, its share was 33.07 percent. “We have not lost this election. Our vote share is more or less intact … we have been defeated by polarization of pseudo-secular forces,” said Giriraj Singh, a prominent BJP M.P. The BJP has won three state polls since May and could share power following a fourth, mostly on the back of Modi’s popularity.

Modi needs to win even more this year and next to gain control of both houses of the national parliament, where he is attempting to push through reforms on land acquisition, tax and other issues to revive the economy. States are allocated seats in the upper house, where the BJP lacks a majority.

A BJP spokesman denied the results were a sign of anti-Modi sentiment, saying the election had been fought solely on local issues. “There is not an iota of negativity against the NDA [national] government anywhere in the country let alone in Delhi,” spokesman GVL Narasimha Rao told NDTV.

But analyst Amulya Ganguli said people were tired of waiting for the reforms the BJP had promised ahead of last year’s general elections. “There is no doubt that Modi’s popularity has dwindled,” he said. “People in Delhi want development and Modi has nationally failed to deliver on his promises. There is a likelihood Delhi voters didn’t fall for him again.”

Kejriwal famously declared himself an anarchist during his brief tenure last year and staged several street protests outside government offices. After winning plaudits for rejecting the VIP culture of Indian politics, including by taking the metro to his inauguration, his administration lost its sheen, with a raid on a largely African neighborhood sparking claims of racism.

But Kejriwal won Delhi voters round this time with campaign promises such as free Wi-Fi for the capital’s 17 million residents.