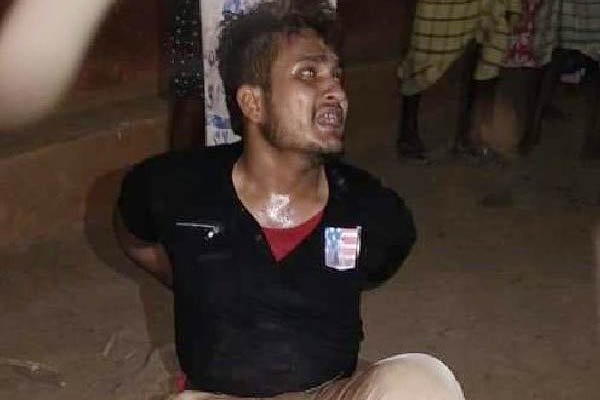 Indian police arrested 11 people on Tuesday over the killing of a Muslim man who was tortured and forced to chant Hindu slogans in the latest mob violence to shock the nation.

Two police officers have also been suspended over the handling of the lynching of Tabrez Ansari, captured on a video that went viral on Indian social media.

The 24-year-old is seen in the video crying and pleading as a mob in Jharkhand state forces him to chant “Jai Sri Ram”—hail Lord Ram—a slogan widely used by Hindu hardliners.

Ansari had been accused by villagers of carrying out a burglary. He was tied to a pole and beaten for up to 12 hours before police first detained him in Seraikela, and then took him to hospital—where he died on Saturday. “We have arrested 11 people. Two police have also been suspended because they failed to inform seniors about the case and tried to manage it at their level,” said Seraikela police chief Karthik S.

Media reports said Ansari’s wife has accused police of deliberately taking him to jail first—instead of a hospital—despite the critical injuries he suffered.

News of the death emerged as the Indian government rejected a U.S. State Department report that said religious violence against minorities has spiked under the rightwing Hindu Prime Minister Narendra Modi. The U.S. religious freedom report said there had been growing numbers of attacks by groups claiming to protect cows—considered sacred by Hindus—on Muslims and low-caste Dalits since 2014 when Modi came to power.

Opponents in India have also accused the government of not doing enough to stop lynchings.

Minority Affairs Minister Mukhtar Abbas Naqvi condemned the killing however, and said the government would not let a “destructive agenda” dominate India’s development efforts. “People who are involved in such incidents have only one motive—to spoil the positive atmosphere created by the government,” he said.

The opposition Congress party accused Modi’s rightwing Bharatiya Janata Party (BJP) of failing to protect Muslims and other minorities. “Can the BJP government honestly refute the U.S. government report on minority safety when Muslims and Dalits are being openly lynched every other day?” said Shama Mohamed, a spokesperson for Congress.