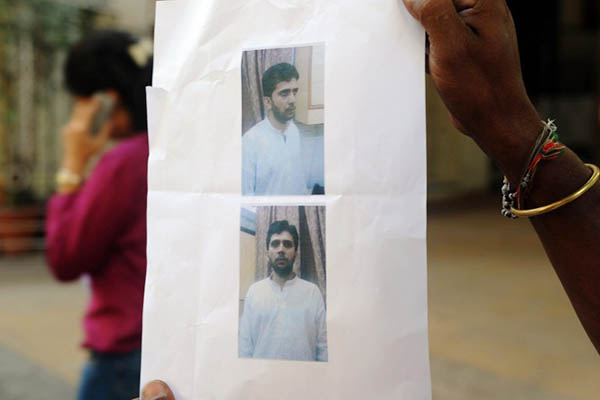 Yasin Bhatkal is alleged to have masterminded attack on restaurant in Pune.

Indian police have arrested the alleged co-founder of top homegrown militant group the Indian Mujahideen, which is suspected of killing hundreds in multiple attacks across the country, a minister said Thursday.

Yasin Bhatkal, believed to be in his 30s, was arrested near the border with Nepal and is in police custody in the northern state of Bihar, Home Minister Sushilkumar Shinde told reporters in the capital. “He is being interrogated,” he said. “I cannot disclose which intelligence agencies were involved.”

The banned Indian Mujahideen came to public attention in November 2007 following serial blasts in Uttar Pradesh state. It is accused of a string of attacks since then in Mumbai, Bangalore, New Delhi and Pune among other locations.

The group is thought to head a network of homegrown Islamist militant groups, with some analysts believing it has links to the powerful Pakistan-based Lashkar-e-Taiba (LeT) and Jaish-e-Mohammed militant organizations.

Bhatkal was named as a co-conspirator over an attack on the German Bakery restaurant in the western city of Pune in 2010 when a bomb placed in a rucksack under a table exploded, killing 17 people including five foreigners. Reports say he was captured on CCTV footage in the restaurant, planting the bomb shortly before the blast.

His arrest on Wednesday evening is another success for the Indian security forces following the detention earlier this month of another alleged top militant, Abdul Karim Tunda, who is thought to be a senior member of the LeT.

It is not known if the two arrests are linked but Tunda, who was also arrested near the Nepal border, has been cooperating with police, according to newspaper reports. Tunda is accused of helping mastermind serial blasts in Mumbai in 1993 in which 250 people died, as well as more than 40 other deadly bomb attacks across the country.

The most recent deadly attack believed to have been mounted by the Indian Mujahideen came in February this year when twin bombs strapped to bicycles exploded in the city of Hyderabad, killing 16 people and wounding more than one hundred. It was also linked to bomb attacks on July 7 this year at Bodh Gaya, a UNESCO world heritage site that is revered by Buddhists. The blasts were suspected to have been staged in retaliation for violence against Muslims in Buddhist-majority Myanmar.

Bhatkal is from the southern state of Karnataka, where police confirmed that the National Intelligence Agency had communicated his arrest.

“The Karnataka police provided information and photographs of Bhatkal to the NIA,” said state inspector general of police Bhaskar Rao.

Homegrown Islamist militant groups are still a relatively new menace for India, which has traditionally been targeted by groups based in or directly supported by neighboring Pakistan. Young recruits are drawn to the group’s message of fighting for the rights of India’s economically disadvantaged Muslims and avenging religious riots such as those in Gujarat in 2002 in which more than 1,000 Muslims were killed, analysts say.

Nepal police spokesman Nawa Raj Silwal said that Nepalese police were not involved in the arrest of Bhatkal.

SONIA ATE THE MEAT OF INDIAN CHILDREN TO SEAL HER PACT WITH HER JEWISH BANKERS: RAWsTraffickingOfIndianChildrenDOTblogspotDOTcom .
Indian media should cover nothing but Satish Chandra. India can economically grow 30% per year or more without foreign investment and be the world’s supreme military power immediately for which he — the world’s greatest scientist — has been suppressed with 24-hour satellite surveillance for 36 years. Modi is CIA-sponsored. All politicians are CIA-controlled. India’s government is a proxy for the CIA. The requirement, brought by Manmohan Singh, for mid-career Indian civil servants (sending military officers for training to the United States has the same purpose) to go to U.S. universities for training so their future career prospects, promotions, etc. are controlled by Americans is meant to make India’s government as a proxy for the CIA more perfect. A long-standing requirement in American and British universities is that to receive a Ph.D. degree from them, Indians have to agree to work for American or British intelligence agencies. IndiasLegitimateRulerSatishChandraDOTblogspotDOTcom