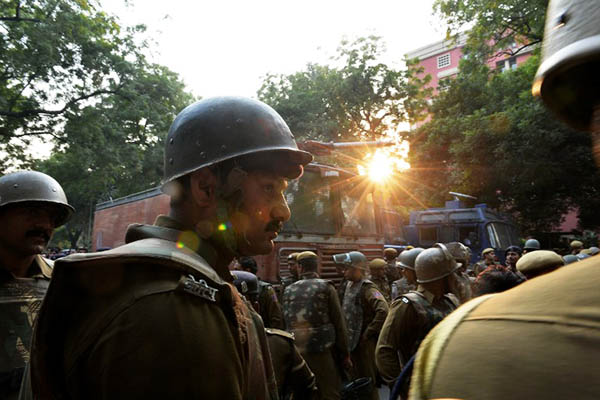 Rampal Maharaj’s devotees attacked police who tried to arrest him on court orders.

Hundreds of armed supporters of a controversial guru clashed Tuesday with baton-wielding police who tried to storm his fortified ashram and arrest him in northern India, officers said.

Police fired tear gas and water cannon at devotees of the self-styled “godman,” who have spent days guarding the sprawling compound outside Hisar city. Two officers were wounded by what appeared to be live firing coming from the ashram, where supporters including women and children were holed up, director general of police S. N. Vashisht said.

“We had prior information that they had stones, petrol bombs, weapons, batons and sticks and acid pouches,” Vashisht told reporters in the city of Chandigarh. “Two of our policemen were hit by bullets and are admitted to hospital. It is still a live situation. We will not stop until we catch this criminal,” he said, adding that some supporters were calling themselves “Baba’s commandos.”

Police were attempting to ensure women and children inside the compound were not caught in the clashes, Vashisht said. “It is our hope that the innocents trapped inside the Ashram can be taken out safely.”

Devotees described scenes of panic inside the building, with some saying they were stopped from leaving by more senior supporters as police started moving in, according to the Press Trust of India (PTI) news agency. “There are so many people still inside and the vast majority of them want to leave. But they are not being allowed to leave,” one woman who managed to flee told PTI.

Police in recent days have cut off water and electricity supplies and blocked roads to prevent deliveries of food to the ashram in a bid to flush out the guru and his flock. The guru’s counsel has cited ill health as reason for his failure to appear three times in the High Court. But an official helping with the case accused him of openly defying the court.

“Baba Rampal has raised a private army of supporters who are openly confronting with the police, the government and the administration,” said Anupam Gupta, an amicus curiae. “He has openly proclaimed that he is above the law and judicial systems,” Gupta told reporters.

On his website Rampal, an engineer by trade, says he follows the 15th-century mystic poet Kabir, who has many devotees in India and abroad. Rampal says he became a guru after years of failing to attain “mental peace” and “complete salvation” by visiting temples and worshipping gods.

For many Indians, gurus play an integral role in daily life. They say they offer a pathway to enlightenment in return for spiritual devotion and often donations to ashrams, temples and charity projects.