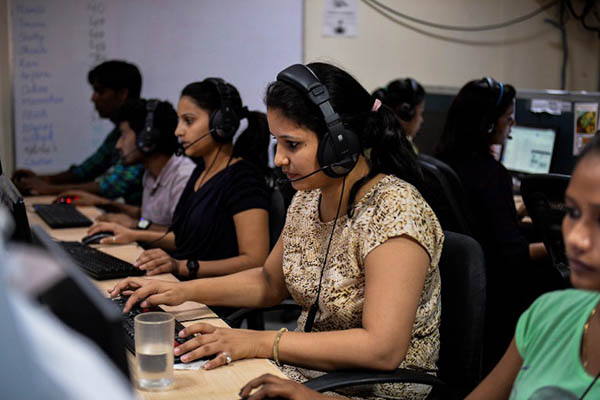 Authorities warn similar scams could be operating across country.

A multimillion-dollar racket that used fake Indian call centers to trick U.S. citizens into paying bogus tax bills may be the tip of the iceberg, with police warning similar scams could be operating across the country.

School leavers or college dropouts would be trained to speak with an American accent, posing as U.S. Internal Revenue Service officials and scare people into believing they owed the government cash, detectives said. The scheme, which had been operating for over a year, netted more than 10 million rupees ($150,000) a day, they added.

More than 70 people have been arrested after police this month swooped on call centers in western India, from Mumbai to the Gujarat capital of Ahmedabad, but they suspect the network could stretch even further. “We believe that the racket is spread across India, including in the north,” said Parambir Singh, commissioner of police in the Mumbai suburb of Thane.

Police from Thane, on the outskirts of India’s financial capital, rounded up at least 770 employees of bogus call centers on Oct. 4. Most were let go pending further investigations but 72 were arrested while another suspect was detained this week as police try to close in on the 23-year-old alleged mastermind.

It is claimed the accused would berate victims for falsely failing to pay taxes and then threaten them with jail if they did not cough up immediately. The con artists would use an altered caller ID number that made it look like they were ringing from the United States and often quoted IRS badge numbers to make them appear legitimate.

The fraudsters would trick the victim into sending money, often through pre-paid debit cards that can be purchased at stores like Walmart, or even by buying Apple iTunes gift cards. In both instances transfers are made by the victim handing over the card’s registration number.

The iTunes scam has even led Apple to issue a global warning on its website urging people not to give the number to someone they do not know.

The IRS has been warning about identical scams for a few years with reports in U.S. media that such schemes might have been operating out of India. In January, the U.S. Treasury Inspector General for Tax Administration said it was aware of more than 5,000 victims who had paid a total of more than $26.5 million in such scams since October 2013.

“It is one of the biggest fraud cases to surface in recent times in Mumbai,” said Parag Manere, Thane police deputy commissioner, adding that the ringleaders found willing recruits. “Hiring was easy. They just gave out pamphlets about job openings and received applications, mostly from school or college dropouts,” said Manere.

Commissioner Singh said ringleaders “lured youngsters with good working knowledge of English and trained them how to speak with an American accent.”

Police believe the recruits were paid 30,000-70,000 rupees a month, plus commission. Some made the initial calls while others were employed to “close” deals. They would work through the night to catch Americans during their day and sometimes left threatening voicemail messages if their targets didn’t answer the phone, it is alleged.

A victim of a similar-sounding scam told NBC last year the caller had her “so frightened” but felt “embarrassed, guilty and ashamed” when she realized she had been swindled.

Singh said Thane police knew of 2,000 people suspected of involvement in the scam, but the force believes there are more, and is working with their counterparts in neighboring Gujarat state and the U.S. Federal Bureau of Investigation.

Police in Ahmedabad raided more than half a dozen call centers following the Thane operation, a senior crime branch official told AFP, while searches were also carried out in the Gujarati cities of Bhuj, Surat and Vadodara.

Police are desperate to find alleged mastermind Sagar Thakkar, known as “Shaggy,” who is from Ahmedabad but may have fled India, possibly to Dubai. Thakkar had half a dozen people working for him in the U.S. and was preparing to expand operations, according to the Ahmedabad officer. “He was planning to set up five more call centers by December,” he said.