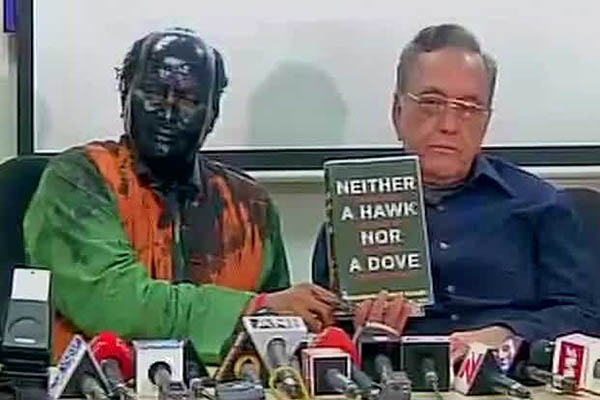 Sudheendra Kulkarni poses with Kasuri after being allegedly assaulted by Shiv Sena activists. No Credit

Activist was doused with black ink for organizing event in Mumbai in latest incident of attack on free speech.

Far-right Indian protesters angry at the planned launch of a former Pakistani foreign minister’s book doused the event organizer with black ink on Monday, the latest apparent attack on free speech in the country.

Sudheendra Kulkarni said he was assaulted as he left his home in Mumbai by a group of activists from the Hindu nationalist Shiv Sena party who wanted to intimidate him. Kulkarni condemned the incident as an “assault on democracy” as he addressed the media in Mumbai, his face and hair covered in ink.

Mumbai police pointed the blame at Shiv Sena, whose spokesman described the incident as a “non-violent protest.”

India and Pakistan have been rivals since gaining independence from Britain in 1947, and have fought three wars.

“A group of 10 or 15 Shiv Sainiks mobbed me, they stopped my car, asked me to come out, they caught me, started abusing me, they said we had ordered you to stop the launch this evening, you didn’t listen to us, this is what we’ll do with you,” said Kulkarni.

The Shiv Sena, a junior partner in a ruling coalition with the Bharatiya Janata Party in the Maharashtra state government, was last week accused of using threats to force the cancellation of an appearance in Mumbai by Pakistani singer Ghulam Ali.

There are growing concerns over freedom of speech in India after the execution-style killing in August of M. M. Kalburgi, a leading secular scholar who had angered hardline Hindu groups. Several Indian winners of the prestigious Sahitya Akademi (National Academy of Letters) award have handed back the prize in recent days to protest at that incident. The writers said they were also protesting at the government’s failure to condemn the lynching last month of a Muslim man suspected of eating beef.

India’s Culture Minister Mahesh Sharma criticized Monday’s attack, saying protests should be “within the democratic framework of our constitution.”

“In our democracy we should ensure that all our views and protests stay within the constitutional principles,” he said.

Shiv Sena spokesman Sanjay Raut said he supported the protesters’ actions but stopped short of admitting that activists from his party had been responsible. “We do not call it an attack, it was a non-violent protest,” he told reporters, describing the incident as a “mild reaction.”

Khurshid Mahmud Kasuri’s Neither a Hawk nor a Dove: An Insider’s Account of Pakistan’s Foreign Policy was due to be launched in the western Indian city later on Monday.

Sudheendra Kulkarni vowed to press ahead with the event, saying the state government had promised extra security. “We will not buckle under this coercion. It’s an assault on democracy, an assault on the Indian constitution and assault on Indian culture,” said Kulkarni.