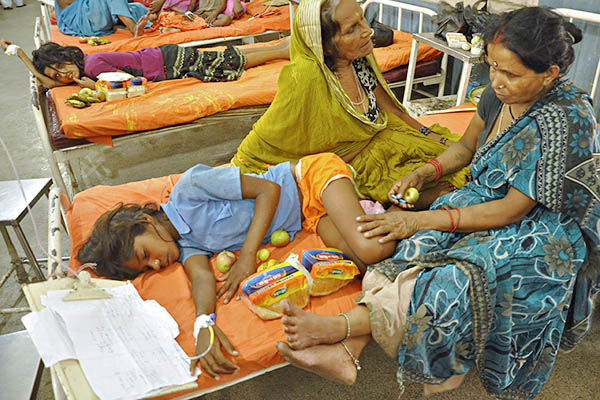 The children, aged 4 to 12, died after eating lentils, vegetables, and rice cooked at a village school in the state of Bihar on Tuesday, sparking violent protests and an investigation into the cause. Some 30 children remain ill in hospitals in the state capital Patna and the city of Chhapra after eating the food, which initial tests showed may have been tainted with insecticide.

Children elsewhere in the state were dumping their meals in bins or refusing to even touch them, despite pleas from school officials that the tragedy would not occur again, a senior state government official said.

“Parents have warned their children to not even touch the meal served in the school,” said Lakshmanan, director of the midday meal scheme in Bihar. “Some of the students dumped the lunch in school dustbins and we are trying to convince everyone that the tragedy will not be repeated.”

India’s state governments run the world’s largest school feeding program involving 120 million children. Educators see it as a way to increase school attendance, in a country where almost half of all young children are undernourished. But children often suffer from food poisoning due to poor hygiene in kitchens and occasionally substandard food.

As fears about the scheme spread, police stepped up their investigation into the tragedy, conducting raids across the district of Saran, where the village school is located. Police raided the home of the school headmistress, Meena Kumari, who fled after the children started dying on Tuesday, a senior unnamed officer said. “We found two containers filled with insecticide in the headmistress’s house along with pulses, vegetables, and rice allotted for the midday meals,” said the officer, who is investigating the deaths. “Only the headmistress can tell whether the incident was a conspiracy or a blunder caused due to carelessness.”

A state government minister has said the cook complained to the headmistress about the smell of the oil used to cook the meal, before going ahead on Tuesday. But the headmistress allegedly dismissed her concerns, the minister said.

At a hospital in Chhapra, the main town of Saran district, there were emotional scenes as children, their limbs dangling and heads lolling, were admitted. Other children, lying listless on stretchers, were placed on intravenous drips amid chaotic scenes at the hospital. Outside, inconsolable relatives wept.

“My children had gone to school to study. They came back home crying, and said it hurts,” one distraught father told the NDTV news network. “I took them into my arms, but they kept crying, saying their stomach hurt very badly.” Running to the school to find out what had happened, the father said he saw “many bodies of children lying on the ground.”

As the death toll continued to rise, angry residents armed with poles and sticks took to the streets of Chhapra. The mob smashed windows of police buses and other vehicles and overturned a police booth. “Hundreds of angry people staged a protest in Saran since late Tuesday night, demanding stern action against government officials responsible for this shocking incident,” said district government official S. K. Mall.

Bihar’s Chief Minister Nitish Kumar announced compensation of Rs. 200,000 for each of the bereaved families.

Meanwhile, some 50 children fell ill in a neighboring district in Bihar on Wednesday after eating lunch at their school. They were given first aid but none needed to be admitted to hospital, an official said. “On enquiry we found a lizard in the food that was cooked in the school premises and we have already ordered an investigation,” district administrator Lokesh Kumar Singh said by phone.

Last year more than 130 students were taken to hospital in the western city of Pune after eating lunch at school, the Times of India reported. A probe revealed that the food was contaminated with E. coli bacteria.