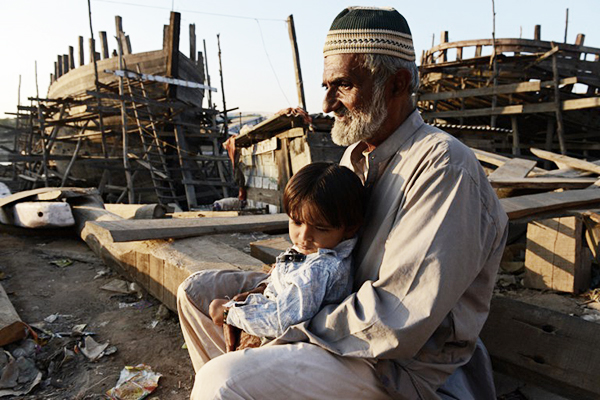 The sun sets on Gujarat’s once thriving shipbuilding industry.

Shailesh Madiyar forlornly surveys the giant shipyard in the Indian port of Mandvi. A place synonymous with wooden boatbuilding for centuries, it now lies largely deserted.

“Four years ago, around 20 ships were being made at any one time, now there are just two,” says Madiyar, of the Mandvi shipbuilders’ association. “These days, no more than five or six are made in a year,” he said, gesturing toward around a dozen half-built boats, which have been shored up like carcasses after construction was abandoned.

Mandvi stands on the banks of the Rukmavati River which flows into the Arabian Sea. A sleepy town located in western Gujarat state, it’s a place where shipbuilding and sea trading have traditionally gone hand in hand. But both industries have been pummeled by a ban from sailing in the pirate-infested waters off Somalia, once a lucrative trading destination.

The restriction on certain Indian-registered vessels was introduced in 2010 shortly after Somali pirates captured eight boats from Gujarat and almost 100 Indian crew members in a flurry of attacks over a period of several days. Small cargo boats, or ‘motorized sailing vessels,’ are now prohibited from sailing south of Oman, effectively blocking trade not only to Somalia but other African countries such as Kenya and Tanzania, as well as Yemen.

“No Somalia, no trade. This ban has been disastrous for us,” said Musabhai Sameja, whose family has been involved in shipping in Mandvi for three generations. “Most traders have seen their income drop by half,” he added, complaining that investment in the construction of new boats has all but dried up.

For four centuries, generations of craftsmen from the small town have built ships prized by traders for ferrying goods along the ancient Indian Ocean trade routes that link Asia to the Middle East and Africa. Today, using techniques passed down through generations, the few craftsmen who still have work build a kind of mast-less dhow favored for its durability and also its size, which allows easy access to the region’s smaller ports.

The working day begins at the crack of dawn with a dizzying ascent up a ladder pitched steep to the side of the boat. The craftsmen then use traditional tools such as handsaws, hammers, and chisels to cut and shape planks of sal, a hard wood native to South Asia.

With an average cargo capacity of 1,000 tons, Sameja said the boats fill a niche in the trade of basics such as rice and flour to war-ravaged Somalia, a country with a long coastline but few ports accessible to big container ships. But more recently, the boats have been seen as easy prey for pirates operating in one of the world’s busiest shipping routes, according to the ban imposed by India’s Directorate General of Shipping in March 2010. Much smaller than tankers and lacking sophisticated tracking equipment, the boats are easier to seize and then use as mother ships from which to attack larger vessels.

But Sameja said traders are prepared to take the risk and would have preferred to employ private security to protect their ships. Meanwhile, with no such restrictions, business to Somalia for traders based mainly in the United Arab Emirates is thriving.

Edward Simpson, an expert on the dhow trade at the School of Oriental and African Studies in London, said shipbuilders in Dubai are constructing wooden boats with twice the cargo space as the vessels from Mandvi. He recently saw a Somalia-bound ship being loaded in Dubai with everything from Japanese second-hand cars, generators and tractors, to eau de cologne.

While some families have moved their business from Mandvi to the U.A.E. to skirt the ban, others have quit altogether. “There are only about 10 families left in the trade now,” said Saleh Mohammed, who sold his last cargo boat a year ago. “Before the ban there were more than 30.”

Following the ban, Mohammed could only do business with countries in the Gulf such as Iran and Iraq where large ports meant his small vessels struggled to compete with container ships equipped with air-conditioning for perishable goods. “So it was better to run away from the business and sell up,” he said. With the proceeds he bought a hotel that lies not far from the dock where he used to moor his ships.

The sun may be setting on shipbuilding in Mandvi, but the skills of its craftsmen will stay in demand in the coming years for the upkeep and repair of existing ships which are usually seaworthy for at least 40 years.

Mohammed said he misses the trade in which his ancestors prospered. His grandfather used to take his small sailing dhow on the two-month voyage to East Africa where he traded goods as far as the spice islands of Zanzibar. But after three decades keeping the family business afloat, he sighed: “I’m now better off sitting in my hotel than running around chasing dhows.”