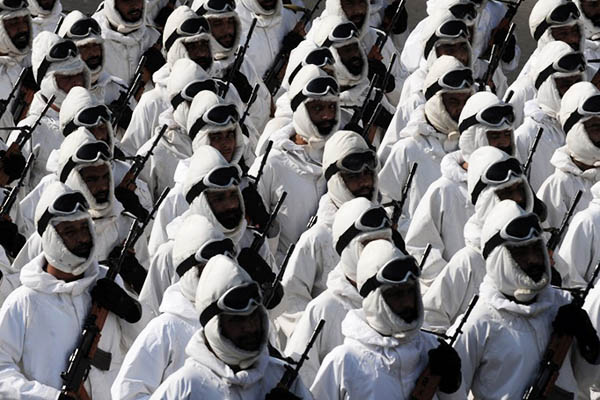 Army says there is little chance of survival for any of the 10 victims buried in landslide.

The Indian army said Thursday there was little chance of finding alive any of the 10 soldiers buried in an avalanche at the Siachen Glacier in the remote Himalayas, as rescue efforts continued.

The soldiers were on duty at an army post on a glacier at an altitude of 5,900 meters when it was hit by a massive avalanche early Wednesday. Specialist army and air force teams searched for a second day at the site, near the de facto border with Pakistan.

“It is with deepest regrets that we have to state that chances of finding any survivors are now very remote,” General D. S. Hooda of the army’s Northern Command said in a statement. “Rescue teams are braving adverse weather and effects of rarified atmosphere to locate and rescue survivors,” the statement added.

Prime Minister Narendra Modi paid tribute to the soldiers and sent condolences to their families on Twitter. “Demise of soldiers in Siachen is very tragic. I salute the brave soldiers who gave their lives to the nation,” he wrote.

Special equipment has been flown in to Leh, the main city in the high-altitude region known as Ladakh, to assist the rescue efforts, officials said.

Indian troops patrol the Siachen Glacier, dubbed the world’s highest battlefield, in the Kashmir region, which is disputed between India and Pakistan.

Avalanches and landslides are common in the area during winter and temperatures can drop as low as minus 60 degrees Celsius. In January, four soldiers were killed by an avalanche, while last year another four died when their vehicle was buried under an avalanche near Leh.

An estimated 8,000 troops have died on the glacier since 1984, almost all of them from avalanches, landslides, frostbite, altitude sickness or heart failure rather than combat.

Regional rivals India and Pakistan fought over Siachen in 1987. But guns on the glacier have largely fallen silent since a peace process began in 2004.