Indian Student Attacked in Court as Sedition Row Boils Over 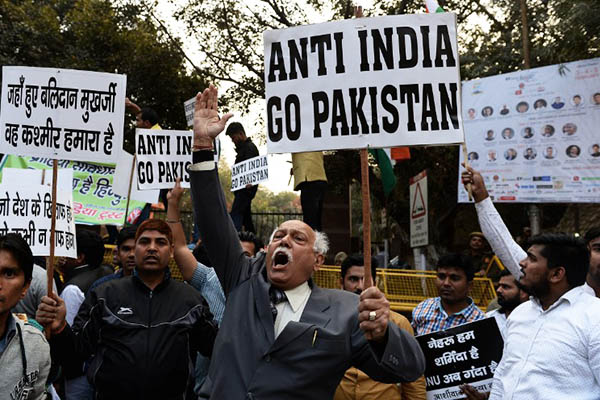 Rights organizations have demanded protester be released and have accused state of abusing outdated laws.

An Indian student leader arrested on a controversial sedition charge was attacked on Wednesday when police brought him into court, as anger over a case that has sparked mass protests boiled over.

An AFP correspondent saw men inside the court set upon Kanhaiya Kumar, who was arrested on Friday over a rally at Delhi’s prestigious Jawaharlal Nehru University where anti-India slogans were chanted.

India’s Supreme Court, which had directed Delhi police to ensure the safety of all inside the lower court following an earlier outbreak of violence, dispatched a team of lawyers to assess the situation. “We have informed the Supreme Court about the atmosphere of terror in Patiala House,” said one of the lawyers, A.D.N. Rao. “The accused was beaten up. The panel members were also heckled.”

The 32-year-old student union leader’s arrest has sparked a major row over freedom of expression in India, where some rights campaigners say the Hindu nationalist government is using the British-era sedition law to clamp down on dissent.

Sedition carries a maximum penalty of life imprisonment although convictions are rare.

Kumar denies he was among those chanting anti-India slogans at last Tuesday’s rally to mark the 2013 hanging of Kashmiri separatist Mohammed Afzal Guru over a deadly 2001 attack on the Indian parliament. The student leader was sent to judicial custody until March 2.

Amnesty International called for the immediate release of Kumar and S.A.R Geelani, a former Delhi University lecturer arrested Tuesday on the same charge in connection with another event marking Guru’s death. “The sedition law was used by the British to curb free expression during India’s independence struggle,” said Tara Rao, programs director at Amnesty International India. “It’s unfortunate that the government is using it now to silence and harass those with divergent opinions.”

Hundreds of police were deployed at the Patiala House court in Delhi ahead of Kumar’s appearance, after students, academics and journalists were attacked when they turned out to see him on Monday. Television footage showed chaotic scenes as a frightened looking Kumar was dragged inside by police, some carrying riot shields.

A large group of men outside the court, who appeared to be lawyers and some of whom were carrying Indian flags, chanted slogans including “Down with Kanhaiya Kumar.” Some threw stones at journalists who were there to cover the hearing.

Kumar had to be confined to the courtroom for nearly three hours because of the crowds outside, the Press Trust of India said.

Delhi police commissioner B. S. Bassi, who has come under fire over Kumar’s arrest, defended his officers’ handling of the situation. “There was jostling, there was pushing and pulling. Notwithstanding the excitement of the crowd, our officers protected the accused,” he told reporters.

Bassi also said three lawyers and a state-level lawmaker with the ruling Bharatiya Janata Party (BJP) had been summoned over Monday’s violence. The opposition Congress party had earlier blamed supporters of the BJP for that unrest, which provoked outrage among journalists and academics.

“[The] system must prevail. Obviously it is a matter of concern for everybody when a person who is in police custody, if he is manhandled,” junior home minister Kiren Rijiju told NDTV.

The latest violence came as police mounted raids in several Indian cities to hunt for other students accused of involvement in the rally to protest against Guru’s execution three years ago. “We have identified the ringleaders and a search is on to find them. I am confident they will be arrested soon,” said Bassi.

Police sources told AFP raids were taking place across the states of Uttar Pradesh, Maharashtra and the Himalayan region of Jammu and Kashmir, where separatist violence has simmered for decades. Protests against Guru’s execution have regularly been held in Kashmir, where many believe he was not given a fair trial. Guru always denied plotting the attack, which was carried out by Kashmiri militants.

Sedition charges have been used in the past against supporters of independence for the disputed territory of Kashmir, which is divided between India and Pakistan and claimed in full by both.

One of the last prominent convictions for sedition in India was that of Binayak Sen, who was jailed for life in 2010 for allegedly helping Maoist rebels but later released on the orders of the Supreme Court.

Hundreds of teachers went on strike at JNU on Tuesday, where many students have said they will boycott classes until Kumar is released. There have been major protests against his arrest in Delhi and in the eastern city of Kolkata, where students at Jadavpur University held a rally on Tuesday.