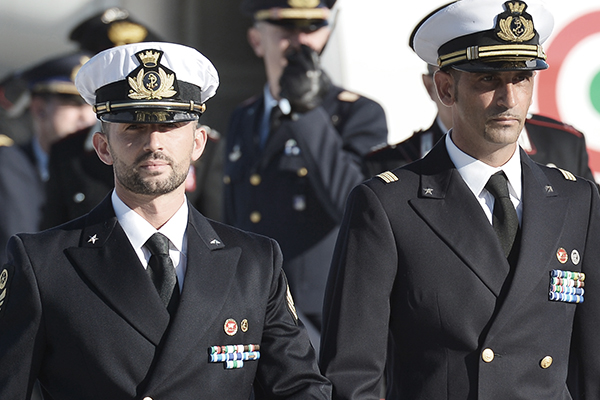 The trial has roiled relations between New Delhi and Rome.

The case has soured diplomatic relations between New Delhi and Rome. Last month, Italy recalled its ambassador to India and summoned the Indian envoy to express concern at the delays in the court proceedings.

Marines Massimiliano Latorre and Salvatore Girone are accused of shooting the fishermen off the coast of the southern state of Kerala in February last year while they were serving as security guards on an Italian-flagged cargo ship. The pair, who have been given bail and are staying at the Italian Embassy in New Delhi, say they mistook the fishing boat for a pirate vessel and only fired warning shots.

The Supreme Court is expected to start hearing the marines’ petition in May, Titus said. No decision is expected until at least July or August due to the court’s summer vacation break. Titus said lawyers for the marines have applied to the court for permission for them to return to Italy until judges decide on the petition.

India dropped in February plans to prosecute the marines under tough antipiracy laws which carry the death penalty but insisted on the National Investigation Agency’s right to lead the investigation. Italy has argued the agency has no jurisdiction to probe offences under the Indian Penal Code. Italy also has insisted that the pair should be tried on home soil since the shootings involved an Italian-flagged vessel in what Rome maintains were international waters. India asserts the killings took place in waters under its jurisdiction.

Earlier this week, Italy declared it would boycott the Indian trial of the marines, according to the Italian news agency ANSA’s website. Italy’s special envoy in the case Staffan de Mistura was quoted as saying, “the Italian position is very firm” and that is “no trial” in India. “We will not be present,” De Mistura told an Italian House committee on Wednesday.