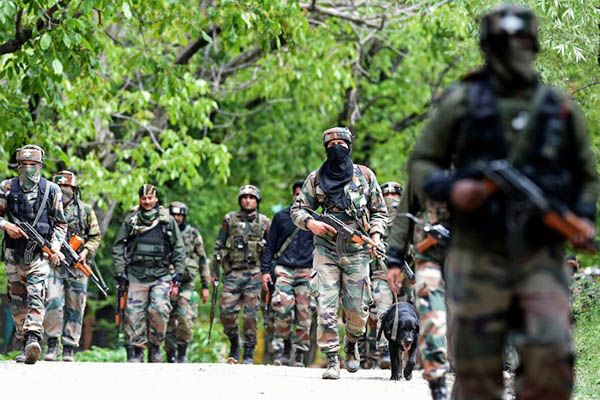 Thousands of soldiers and paramilitaries were on Thursday engaged in a huge anti-militant operation in India-administered Kashmir, where armed rebels have repeatedly attacked government forces in recent weeks.

Police said government forces had surrounded at least 20 villages in the drive, launched early Thursday in Shopian district in the volatile south of the disputed Himalayan region. “It is an unprecedented operation,” deputy inspector general of police S. P. Pani told AFP. “It is impossible to capture the militants, but we hope there will be contact [exchange of fire] with them in the course of the day.”

Suspected militants are frequently killed in shoot-outs with government forces in Kashmir, but are only rarely captured alive.

Witnesses said hundreds of residents came out onto the streets in two villages, Sug and Tarkwangan, during the search operations and threw stones at the soldiers. One said soldiers had attacked private homes in his village with sticks and rocks. “It was scary. Many houses were damaged,” the villager told AFP by phone, requesting anonymity.

Witnesses said army helicopters were hovering above the area as the search operations were going on.

Kashmir has been divided between India and Pakistan since the end of British rule in 1947, but both claim the territory in its entirety. Rebel groups have fought for decades against the roughly 500,000 Indian soldiers deployed in the Himalayan territory, demanding independence or a merger of the entire territory with Pakistan. Officials say the rebels’ ranks have swelled since July, when the killing of a popular leader by security forces sparked widespread unrest that left at least 100 civilians dead.

Since then armed encounters between rebels and government forces have been more frequent.

The latest operation comes after five police were shot dead this week in a raid on a bank van carrying cash—the latest in a series of bank robberies in the region carried out by suspected militants.

Last week militants killed three soldiers in a pre-dawn assault on a garrison near the de-facto border known as the Line of Control that divides Kashmir between India and Pakistan.