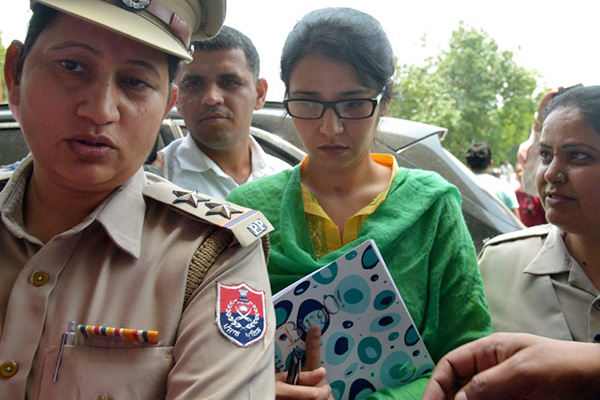 An Indian woman who said she was forced to marry a Pakistani at gunpoint returned to India on Thursday after a court ordered her release.

Uzma Ahmad was reunited with her family at the Wagah border crossing near Amritsar. The case became a new national cause against rival Pakistan in India with Foreign Minister Sushma Swaraj calling Ahmad “India’s daughter” in a Twitter statement to greet news of the release.

Ahmad, who is in her early 20s, met Pakistani Tahir Ali in Malaysia, according to Indian media. She told the Islamabad High Court that Ali forced her to marry him at gunpoint on May 3 when she was visiting Pakistan.

Ahmad has made headlines in India since making her plea to the court on May 12 to be allowed to return.

The case came amid renewed tensions between India and Pakistan over the disputed Kashmir region and an Indian national, Kulbhushan Jadhav, who Pakistan has sentenced to death on spying charges.

She had been staying at the Indian mission in Islamabad since making the accusation.

The court ordered Ali to return the woman’s immigration documents so she could leave. The woman’s brother, Wasim Ahmad, said events leading up to the forced marriage were not clear.

“We don’t know what exactly happened with her there. We will get to know the truth from her when she is back here. So far we have only been hearing from the media,” Press Trust of India news agency quoted him as saying. “We did not expect that she would back this soon,” the brother added.

Swaraj called the family on Thursday to announce that Ahmad “had contacted the Indian mission in Islamabad and her return to the country was being facilitated,” the brother said.

Thanks to Pakistan Govt. for their generosity and quick action. Can” we live together like this?? Do we always have to fight, because the armies??

It is clear that the young lady did not wish her marriage to continue. Had her husband respected her wishes and helped her return to India we could have been saved this international drama.

I congratulate IHC, the legal fraternity, the government but more than anyone else NewsweekPakistan for seeing the whole thing for what it is as the drama unfold and hopefully ended to everyone’s relief.
This was a rare occasion of leaderships in all the involved processes being professional and down to earth and humane rather than everyone on both sides of the chasm; and chasm unfortunately is what defines us, painting a simple and poignant human story as not just that and scoring points on purity of purpose even where there is none.
I am new to the magazine and already in love with it for non partisan and holistic objectivity not regularly shining through in a majority of the subcontinent’s outlets.
Keep up the good work.
And happy Ramadan.