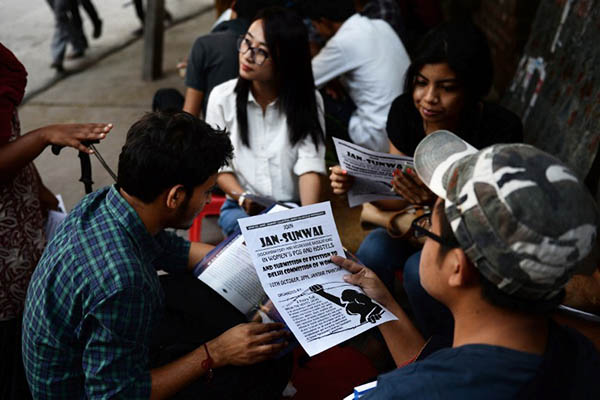 Students say they are being discriminated against, as their male counterparts are allowed to stay outside their dorms until much later.

Twenty-year-old zoology student Rani Choudhary left her family home in Bihar for the bright lights and freedom of the Indian capital. But like most female students in New Delhi she is barred from leaving her dorm at night except with the express permission of her father, thanks to a curfew designed to safeguard her in the city dubbed “India’s rape capital.”

Wary of the city’s disturbing reputation for sexual violence, universities force women to return to their dorms as early as 7:00 p.m.—while their male counterparts can stay out much later.

With the Pinjra Tod (“Break the Cage”) campaign, launched in August, female students are fighting back against what they say is outright discrimination. “You are supposed to go and be back at 7:00 p.m., at 7:30 p.m. and 8:00 p.m., while your friends studying with you, boys, the men in your class, they can [go out at] night and they can enter the hostel by 10 or 12,” said Shambhawi Vikkam, one of the ringleaders of the movement. “And even if they have rules and regulations it doesn’t really apply so strictly,” the 23-year-old arts student at the University of Delhi said.

At a night-time protest in the capital, about a hundred young female students gathered outside a subway station singing as they held up placards proclaiming: “no more curbing late nights.” Other slogans brazenly mocked the rules, declaring “I got a feeling that tonight’s gonna be a good night.”

Several of the nocturnal protesters wear dresses or skirts, defying warnings from parents or the university administration about nighttime dangers in the city.

But for many of India’s female students, the desire for independence also conflicts with family attitudes in the deeply patriarchal country. Choudhary is theoretically allowed out until 11:00 p.m. four times a month and is permitted to spend five nights away from her dorm—but says it is impossible in reality.

“I need the permission of my parents and I know that my father will never allow me to go out at 10:00 p.m.,” Choudhary said. “There is a generational gap with my father,” she said, adding he has always lived in Bihar, a poor, rural state.

Concern for the safety of young women is the main justification for the curfews put forward by the heads of university residences. The fatal gang rape of a medical student in Delhi in December 2012 left a profound mark on the capital, and violence against women has not declined since.

A spokesman for Jamia Millia Islamia University in Delhi said a plan to reform the curfew was “under consideration.”

“[Safety] measures are the need of the hour. We have to be very mindful, there are global concerns over safety of women in India,” Mukesh Ranjan said.

Yet students argue that confining them inside is not the answer. “If you really want to make a city safe for a woman… you have to make the city accessible to her, you have to have more women out in the streets,” she said. “So that is the solution, not locking people inside.”

The students are willing to allow their dorms to set a time to return by, as long as they are not deprived of a social life. “One thing we are demanding is… let hostel curfews be at least half an hour after the library closes or the last metro, so that you’re not locking women out of the public space that they have the right to access,” said Shriya Subhashini, 25, a law student at the University of North Delhi.

A petition by the students addressed to the Delhi Commission for Women—an official body responsible for upholding the rights of women in the city—has collected about 1,200 signatures.

Swati Maliwal, the president of the commission, promises to help the women fight discrimination. “I’ve requested the students to list all the discriminations they suffer from and I will work with them,” Maliwal told AFP. “But Delhi is very unsafe for women and the first priority is to make Delhi safe,” she said.

Ira Trivedi, author of books on love and sexuality in India, says that as long as the gap between women’s aspirations and the rules imposed on them remains wide, protests in cities will grow. “I think young women are developing the courage, confidence and know how—and technology and Internet help a lot—to stand up for themselves and battle such conventions,” Trivedi, the author of India in Love, Marriage and Sexuality in the 21st Century told AFP. “They are beginning to realize how archaic these concepts really are.”