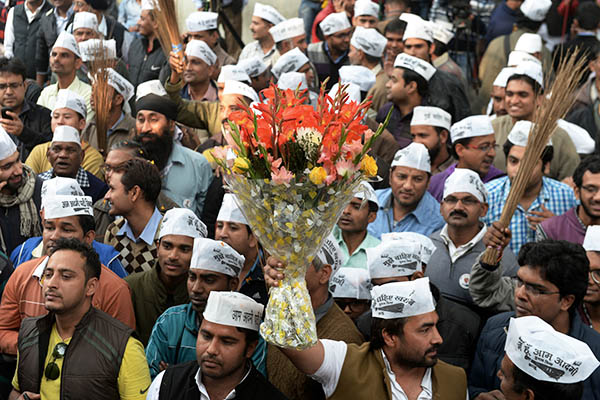 The one-year-old party, campaigning on an anti-corruption platform, has beaten both Congress and the BJP in New Delhi’s state polls.

His electoral debut triggered tremors across Indian politics but anti-corruption crusader Arvind Kejriwal faces huge challenges if he is to unleash an earthquake when the country goes to the polls next year.

Not only did it push Congress into a distant third place, the AAP even deprived the main opposition Bharatiya Janata Party of a majority in Delhi, underlining its potential to damage both of India’s two main parties.

While it only fielded candidates in Delhi, one of five states to elect a new assembly, Kerjriwal indicated that he had wider ambitions. “I would like to congratulate the people of Delhi for starting a trend of honest politics, which will not be limited to Delhi alone, but will spread across the entire country and will be successful in getting rid of corruption and inflation,” he told supporters on Sunday.

Analysts say the dismay felt by voters toward mainstream parties could provide a rich seam far beyond the capital when the world’s largest democracy holds general elections by next May. But they also warn the AAP will have its work cut out raising money and competing against regional parties with established local networks of supporters.

Anupama Jha, the India head of the corruption monitor Transparency International, urged AAP to throw its hat in the ring for the national elections, saying the result in Delhi had highlighted a desire to punish parties for corruption. “If they decide to fight nationally, that would be a welcome change,” Jha said. A survey on perceptions of corruption, published last week by Transparency International, showed India ranked at number 94 out of 177 countries.

Newspapers hailed AAP’s success on Monday, with the Times of India calling it a “spectacular breakthrough” while The Hindu praised “the extraordinary rise” built on “the sense of public disgust with mainstream parties.”

Prime Minister Manmohan Singh’s second term in office since winning re-election in 2009 has been littered with corruption scandals, including allegations over the allocation of lucrative coal mining rights and the chaotic 2010 Commonwealth Games in Delhi.

But frustration over corruption is not limited to Congress. The BJP lost control of the key southern state of Karnataka in May over a multi-billion iron-ore mining scandal.

Kuldip Nayar, a Delhi-based political analyst, said the AAP had reason to be pleased with themselves, but added that it would be hard to replicate its success in areas where regional parties are the natural alternative. “It won’t be a mere fight with BJP and Congress but many regional parties also. Regional parties are strong and close to the people,” said Nayar, warning also that it had raised expectations by campaigning strongly against high utility prices.

“It’s definitely been an impressive start for a barely one-year-old party. I’m sure they will do something. But it is tough, a tough task to ensure electricity bills go down or to even ensure people will get free water while being in opposition. We will have to wait and watch.”

D. H. Pai Panandiker, head of the private RPG Foundation think tank, also said the AAP faced an uphill struggle to build on its initial success. “The AAP’s performance has been impressive, but it will be difficult for them to keep this momentum going because the party is only a Delhi-based phenomenon,” said Panandiker. “People in Delhi were aware of corruption that was taking place and therefore, the response to the AAP was immediate and popular. But that is not the case in other states. Unfortunately, you cannot run a huge party nationally just based on ideologies because you ultimately realize that you need big money to do anything. You get big money through illegal means and illegal money is a necessity for power. It’s sad, but true.”

Kejriwal’s supporters however are confident the party’s message can resonate well beyond Delhi. “Arvind Kejriwal has touched the hearts of the people because the truth is on the side of Arvind Kejriwal,” said AAP activist Jayish Sanghani. “People are fed up with the corruption which is prevalent in society and people have voted for the Aam Aadmi Party and given a warning to the political class of India that if you don’t mend your ways, you will be finished.”