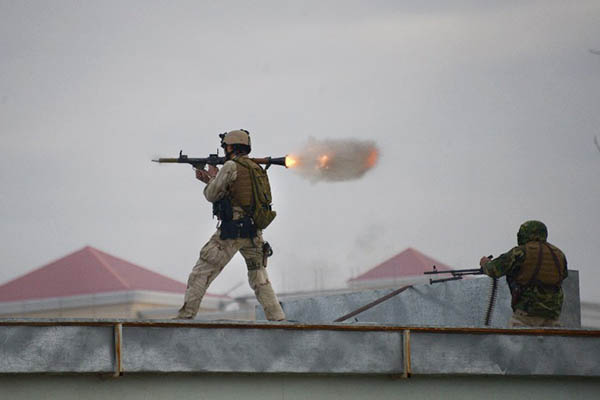 The assault comes after an attack on an Indian airbase that left seven soldiers dead.

Afghan forces battled Monday to end an hours-long gun and bomb siege near the Indian consulate in Mazar-i-Sharif, while gunmen pressed a lengthy assault on an airbase near the Pakistan-India border.

The lethal attacks threaten to derail Indian Prime Minister Narendra Modi’s diplomatic outreach to Pakistan following his first official visit to Afghanistan last month. No group has so far claimed responsibility for the raid on the diplomatic mission in northern Afghanistan, the latest in a series of assaults on Indian installations in the country.

“Our clearance operation is going on near the consulate,” said government spokesman Munir Farhad. “Since it is a residential area, we are proceeding very cautiously after overnight fighting to avoid civilian casualties.”

An Indian official, who was hunkered down in a secure area within the diplomatic enclave, said all consulate employees were safe and accounted for. “We are being attacked,” the official told AFP by telephone from inside the heavily guarded compound. “Fighting is going on,” he said soon after the fighting erupted late Sunday evening.

Vikas Swarup, an Indian foreign ministry spokesman, also told AFP that no Indian casualties had been reported so far.

The attack followed a deadly raid over the weekend by suspected Islamist insurgents on an air force base in the Indian state of Punjab. Seven soldiers were confirmed killed in the raid on the Pathankot base, which triggered a 14-hour gun battle Saturday and spurred Indian forces to be scrambled again on Sunday.

“The operation continues at the base. [With] intermittent firing… we are moving step by step to sanitize the area,” an Army spokesperson in Pathankot told AFP on Monday. “It’s too early to say when the operation will be over.”

Officials suspect the gunmen belong to the Pakistan-based Jaish-e-Mohammed, the group that staged the 2001 attack on the Indian parliament, which brought the two countries to the brink of war. The brazen attack—a rare targeting of an Indian military installation outside disputed Kashmir—threatens to undermine the fragile peace process between the neighboring nations.

The spike in violence comes a week after Modi paid a surprise visit to Pakistan, the first by an Indian premier in 11 years. The visit immediately followed a whirlwind tour of Kabul, where Modi inaugurated an Indian-built parliament complex and gifted three Russian-made helicopters to the Afghan government.

India has been a key supporter of Kabul’s post-Taliban government, and analysts have often pointed to the threat of a “proxy war” in Afghanistan between India and Pakistan.

Pakistan has long been accused of assisting the insurgents, especially with attacks on Indian targets in Afghanistan. The latest unrest coincides with a renewed international push to revive peace talks with the resurgent militant movement.

Afghanistan and Pakistan are set to hold a first round of dialogue between Afghanistan, Pakistan, the U.S. and China on Jan. 11 to lay out a comprehensive roadmap for peace. Pakistan hosted a milestone first round of talks in July but the negotiations stalled when the insurgents belatedly confirmed the death of longtime leader Mullah Omar.

The attack on the consulate in Mazar-i-Sharif marks the latest attack on high-profile Indian targets in Afghanistan. In 2008, a car bomb at the Indian embassy in Kabul killed 60 people and the facility was again hit by a suicide strike in 2009.

Nine civilians, including seven children, were killed in August 2013 when suicide bombers targeted the Indian consulate in Jalalabad. And in May 2014, gunmen launched a pre-dawn attack on India’s consulate in Herat before being repelled by security forces.