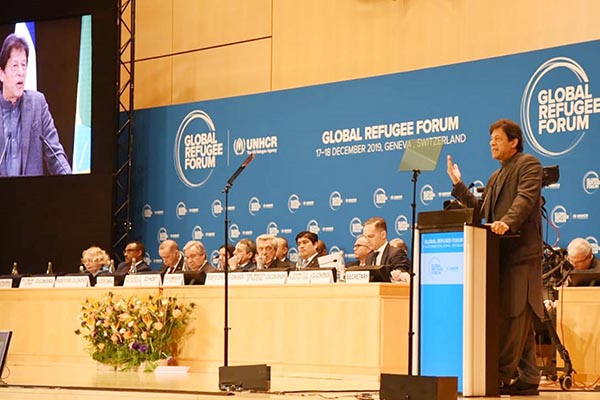 India’s recent actions, including its ongoing siege of Jammu and Kashmir and a controversial citizenship law, risk inciting a new refugee crisis if the global community does not act against it, warned Prime Minister Imran Khan on Tuesday.

“The world must act now and put pressure on the Indian government to prevent it from illegal activities, otherwise there could be the biggest crisis,” he told the opening session of the First Global Refugee Forum of the United Nations in Geneva. He reminded the participants of the meeting that on Aug. 5, New Delhi had unilaterally scrapped the special autonomy granted to India-held Kashmir, placing 8 million people under virtual house arrest, cutting off outside communications, and detaining both pro- and anti-government politicians.

“It is meant to change to demography of Kashmir from Muslim majority to minority—we are likely to have another refugee crisis—a crisis that would draw other crises,” he said. “In the U.N. General Assembly, during my address, I tried to appeal to the international community to take notice,” he added.

He said that even if India were to finally lift the curfew still in place in Kashmir, it still had about 900,000 troops deployed there, who would facilitate the settlement of Hindus in the disputed region to reduce the Muslim majority. “We know from past experience that prevention is better than cure. If the world puts pressure on India, we can prevent it, but once the crisis starts, we all know, it is complicated and difficult,” he added.

Khan also hit out at the Indian government’s passage of the controversial Citizenship Amendment Act, which requires all Indians to prove their citizenship or risk being placed in internment camps. “In Myanmar,” said Khan, “the ethnic cleansing of Muslims started after they had been asked to prove their citizenship.” He said some two million people in India’s Assam were already in peril due to the legislation and warned of the consequences for when the law is implemented throughout India.

“Anyone who fails to prove citizenship would be deregistered. If they did not get citizenship, where would they go,” he said, urging U.N. Secretary General Antonio Guterres to look at the implications of such an eventuality impacting the 200 million Muslims living in India. If such a crisis occurs, said Khan, Pakistan would be on the frontline as India’s neighbor.

“While all other religions [in India] can seek citizenship on basis of persecution—if even 2-3 % of Muslims cannot prove their citizenship, it would be a daunting task. Riots have already broken out in India,” he said. “What is happening next door [to Pakistan] can have an impact on the world community, it is unprecedented,” he stressed.

During his speech, the prime minister also highlighted Pakistan’s efforts to support the peace process in war-torn Afghanistan, saying the only solution to the ongoing unrest was through political settlement. He said the Afghan people had been suffering from internal conflict for 40 years, adding, that Pakistan, as a neighborly nation, had hosted millions of Afghan years over the years. Around 3 million Afghan refugees are still living in Pakistan, he added.

Khan said countries like Pakistan who struggled to provide the basic needs to all their citizens risked being crippled due to a refugee influx. He said it was difficult for richer countries to imagine the impact of such crises, but noted that European countries were finally starting to realize it.

“I see problems of European countries with refugees and [how] rightwing politics are cashing in on the refugee issues,” he said.

Imran Khan also lauded the Turkish government and its people for hosting a huge refugee population in recent years. He appreciated the U.N. secretary general’s strong advocacy for refugees and thanked the world bodies and the Government of Switzerland for co-hosting the refugee summit.

Earlier, the U.N. secretary general and other world leaders also addressed the session and stressed for collective global efforts to effectively tackle the challenges and crises emanating from the influx of refugees.

The Global Refugee Forum—the first major meeting on refugees of the 21st century—was jointly hosted by UNHCR, the U.N. Refugee Agency, and the Government of Switzerland.