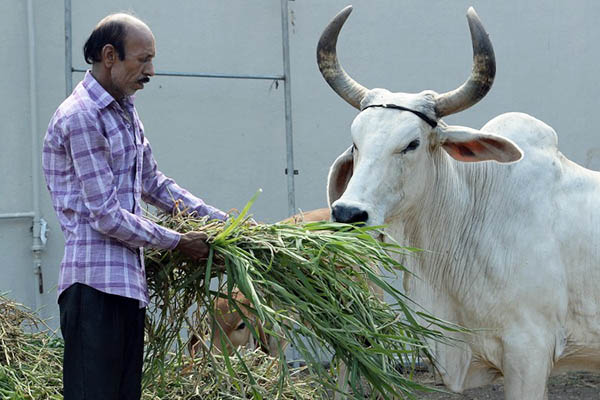 At a care home for cows just outside Mumbai, dedicated staff lovingly tend to the every need of its ageing bovine residents, recently saved from slaughterhouses. “We feed them, we bathe them and if something happens to them we feel bad,” says Sitaram Mangashid, a worker at the Shree Gopala Gaushala in India’s western Maharashtra state.

Shree Gopala is one of an estimated 25,000 gaushalas, or “cow shelters”, in India providing cattle with sanctuary from illegal slaughter and comfortable surroundings to while away their twilight years. Home to some 450 cows—considered sacred by India’s Hindu majority—the shelter is experiencing an influx of elderly bovines since Maharashtra’s government toughened a beef ban three months ago.

“A cow is like a mother to us and it is our duty to look after them,” explains the center’s secretary, Sudhir Ranade. “It is wrong to think that the cow is only of use to us while it gives milk and then once it stops we should just discard it.”

The ban was sought by hardline Hindus and is seen by religious minorities as a sign of their growing power since nationalist Prime Minister Narendra Modi won landslide general elections last year. The new law, which criminalized even the possession of beef, has also sparked fears for the future of the state’s mostly Muslim butchers and cattle traders.

Formed in 2002, the privately run gaushala describes itself on its website as “a home for hapless cows and cattle.” Employing 45 staff, it currently houses around 1,600 animals, including bulls, bullocks, calves and water buffalo.

Some cows were brought to the home by their owners after becoming too old to be of any use to them while others were rescued from the clutches of unlawful slaughterhouses. Several were taken in after being hit by vehicles, while a few abandoned cattle had become ill from ingesting plastic after munching through rubbish in search of food.

Surgery is performed on the injured cows and each one is tenderly nursed until it breathes its last. When the time comes, a priest is on hand to perform the last rites. “He prays that the soul of the departed lies in peace and a small ritual is performed using a garland or some flowers,” Ranade explains to AFP over a cup of fresh milk.

At the Bombay Panjrapole cow shelter, in the heart of Mumbai, the love shown to its inhabitants is also unconditional. “Five hundred of our cows are senior citizens, and 40 to 50 are disabled,” says Adi Mogrelia, secretary of the Bombay Panjrapole Trust, founded in 1834 and thought to be Mumbai’s oldest animal home. “We have cows who are blind, cows who have only one eye and three legs but we still look after them until they die. We treat them as if they were our own family.”

In March, Maharashtra extended the 1976 ban on slaughtering cows to bulls and bullocks, making it punishable by up to five years in prison. The slaughtering of water buffalo remains legal. Since the ban prevented farmers from selling their ageing male bovines to slaughterhouses, new arrivals have been coming to Shree Gopala at the rate of almost 30 a month, according to Ranade.

Mogrelia welcomes the state’s intervention, saying the local government should do more to help private gaushalas, which rely on donations and money sold from milk. “We are very overcrowded, they need to build more to help more cows. Labor costs are going up, fodder costs are going up and we don’t receive any subsidy. It’s very difficult,” he says.

But it’s a different story for the city’s one major legal slaughterhouse and community of largely Muslim butchers who say the beef ban is crippling their livelihoods.

Appasing Pawra, a recently retired senior manager at the Deonar abattoir, says the slaughterhouse is killing only 250 water buffalo a day, down from 550 cattle before the ban. Mohammed Ali Qureshi, president of the Bombay Suburban Beef Dealers’ Welfare Association, estimates around 1,000 licensed local butchers’ shops and stalls have closed down since the ban, with sales plummeting 75 percent.

Qureshi claims the law, implemented by the state’s Bharatiya Janata Party-led Hindu alliance, unfairly targets Muslims. “The butcher community is 99 percent Muslim. They have been butchers for generations and they only know how to cut meat, nothing else. They have no other skills and don’t know what to do. The state has no plan to rehabilitate them,” he says.

Back at Shree Gopala, Ranade insists his home will continue to save as many cows as possible until illegal slaughtering stops. “We have an open-door policy,” he says. “Cows increase our spiritual wealth and have the power to take away any negative energy.”