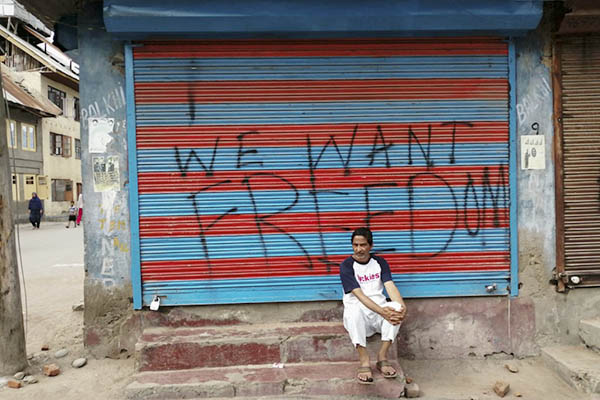 Writing on The Wire, Indian writer Arundhati Roy summarized the brutal actions of New Delhi when it abrogated India-held Kashmir’s special constitutional status: “On Aug. 5, 2019, a year ago today, seven million people in the valley of Kashmir were locked into their homes under a strict military curfew. Thirteen thousand people, ranging from young children and teenage stone-pelters to former chief ministers and major pro-India politicians, were arrested and put into preventive detention, where many of them still remain. At midnight on Aug. 4, phones went dead and internet connections were cut.

“On Aug. 6, a bill was passed in parliament stripping the state of Jammu and Kashmir of its autonomy and special status enshrined in the Indian Constitution. It was divested of statehood and downgraded into two Union Territories, Ladakh and Jammu and Kashmir. Ladakh would have no legislature and would be governed directly by New Delhi.”

One year has gone by and the atrocities in Kashmir have not ceased. The entire world is shocked, and newspapers in Europe and the United States have publicized India’s atrocities in the Valley with graphic details. But a large number of India’s population supports the twice-elected ruling Bharatiya Janata Party (BJP) for this illegal annexation of a territory that it had pledged in its election manifesto many times over. Also, member states of the United Nations appear to have tacitly accepted the absorption of Jammu and Kashmir into India through an amendment of the Indian constitution, which met with little resistance as the BJP has a majority on both houses of the Indian parliament. This means that what India has done is a fait accompli; and a deeply agitated Pakistan may well have to accept it.

The U.N. Security Council has met at the request of Pakistan but nearly all of the veto-carrying permanent members are expected to ignore what India has done. It has been legally pointed out that Pakistan’s reference to a U.N. Security Council resolution recommending plebiscite in Kashmir has ceded status to the bilateral Simla Agreement signed by India and Pakistan in 1972. In the body of the agreement, the word Kashmir is mentioned in two different sections. Section Five of the agreement says: “In Jammu and Kashmir, the line of control resulting from the ceasefire of Dec. 17, 1971, shall be respected by both sides without prejudice to the recognized position of either side.”

This statement shows that through the agreement in 1972, India ditched its own claim that Kashmir was its integral part. Section Seven says: “Both Governments agree that their respective Heads will meet again at a mutually convenient time in the future and that, in the meantime, the representatives of the two sides will meet to discuss further modalities and arrangements for the establishment of durable peace and normalization of relations, including the questions of repatriation of prisoners of war and civilian internees, a final settlement of Jammu and Kashmir and the resumption of diplomatic relations.” This means that the dispute is ultimately a bilateral one and will not be taken to the multilateral forum of the United Nations’ Security Council.

This text shows today that Pakistan will be internationally knocking on firmly shut doors. And the reasons are unfortunately clear for all to grasp except the deeply offended people of Pakistan. They were shocked when last year after the “annexation,” their patron Arab states of Saudi Arabia and the U.A.E., instead of rebuking India, accepted the Aug. 5 assault on the Kashmiri people by the Indian army. One has to retrace some historical steps to realize why Pakistan is in this situation of outrage where it finds no international support.

Pakistan has been engaged with the Kashmir problem right from the start and all its wars were in one way or another related to the disputed region, including the 1971 war that culminated in the ouster of international law from the issue with the signing of the Simla Agreement. Thus buffeted, Pakistan relied on other modalities of warfare to compel India to give up Kashmir through any acceptable mode of consultation with the Kashmiri people. Subsequently the wars it fought with India were related to the Kashmir issue, including the 1965 war, which damaged its high-flying military-led economy and caused it to return to democracy in 1971. The struggle by the elected governments in Islamabad to resolve the “Kashmir problem” through “normalization” with India kept coming to naught when the elected governments were regularly toppled and no prime minister was allowed to finish his tenure.

Then came the covert war, which ultimately destroyed Pakistan’s locus standi in the Kashmir dispute and also seriously damaged its internal governance in the face of the “non-state” warriors who trespassed on the internal sovereignty of the state while overtly challenging the elected governments to exercise their right to normalize relations with India. Its non-state actors were found and arrested inside India while the world watched with a pro-India attitude that Pakistan ignored.

Masood Azhar, the infamous head of the Jaish-e-Muhammad, a terrorist outfit nurtured by Pakistan and Al Qaeda, was active in the Kashmir insurgency during the 1990s and was arrested by the Indian security forces in 1994 but released in 1999 after an Indian Airlines flight was hijacked with the assistance of Al Qaeda militants. The world absorbed this; but a new international attitude came to a head after the 9/11 attack in the United States in 2001 was discovered to have been conceived in Pakistan by one Khalid Sheikh Muhammad of Al Qaeda, the terrorist organization born out of America’s war against Russia in Afghanistan.

In 2008, Pakistani “non-state actor” outfit Lashkar-e-Taiba was found to be behind the Mumbai attacks that turned the world in favor of India and against Pakistan. The world condemned Pakistan and demanded remedies considered good for Pakistan’s own survival. Pakistan appeared unable to act, as Lashkar-e-Taiba’s leader Hafiz Saeed encroached on the internal sovereignty of the state going as far as opening his own “sharia” courts that handed down punishments in the country’s major cities, including Lahore.

Pakistan was skating on thin ice as far as the Kashmir dispute is concerned when another Kashmir-related misadventure took place at Kargil culminating in predictable defeat. In the spring of 1999 the world discovered that Pakistan had made a foray into the Kargil-Dras sector of the Line of Control with India pursuing the not-so-clear objective of a limited war. What were the “objectives” of this “operation” within the framework of Low Intensity Conflict (LIC) embraced by Pakistan?

A study conducted by American think-tank RAND, which examined the Kargil war, was actually an examination of the deterrence breakdown between the two nuclear weapons states in South Asia. The authors guessed at the objectives: “a desire to redeem itself after its humiliating defeat in the 1971war with India: Indian occupation of the Siachen Glacier; a desire to punish India for its periodic shelling of the Neelam Valley road and its other provocations along the Line of Control in Kashmir; a desire to energize what at that point appeared to be a flagging insurgency in the Kashmir Valley; and, finally, a desire to exploit its newly confirmed nuclear capabilities to achieve those lasting political changes in Kashmir that had hitherto eluded Islamabad.”

Today Pakistan has lost international support for “legal” and “political” reasons. Pakistan’s most important ally in the region, China, has joined the world to “correct” Pakistan’s behavior as a state, under the Financial Action Task Force (FATF). Action taken by FATF puts a final end to Pakistan’s “moral” right to stand up for the Kashmiri people. The FATF requires each country “to identify, assess and understand the terrorist financing risks it faces in order to mitigate them and effectively dismantle and disrupt terrorist networks.” It has put Pakistan in the “gray list” as a kind of final warning before it will be put under international sanctions.

Pakistan is confronting India over Kashmir once again with the moral ground slipping from under it because of its non-state actors and its domestic instability, above all its economic decline across decades of low-intensity conflict that failed to harm India enough to cough up Kashmir. It is once again in the oxygen tent of the International Monetary Fund like an addict that simply can’t come off his narcotic habits to act like a normal state. India, with a economy that has been hit by COVID but is still soaring above Pakistan’s—and a hefty foreign exchange reserve to buy the latest “weapons-loaded” drones from the U.S.—has chosen a suitable moment to annex Kashmir; one that seemingly comes with near-complete immunity from international reaction.