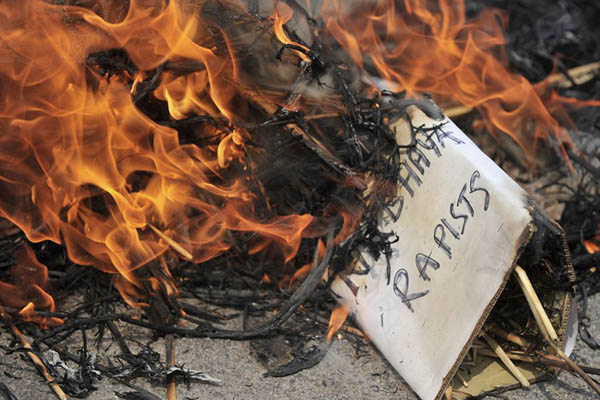 Alleged rapist Syed Farid Khan was dragged out of prison in Nagaland state and beaten to death by mob.

Riot police on Saturday patrolled India’s Dimapur after the public lynching of a rape suspect, enforcing a round-the-clock curfew for a second day as the killing was condemned as “barbaric and inhuman.”

The 35-year-old suspect, accused of raping a woman multiple times and arrested in late February, was dragged out of prison in Nagaland state by a mob before being beaten to death and strung up to a clock tower on Thursday.

Hundreds of riot police patrolled the streets of Dimapur district after authorities imposed a curfew, with Nagaland Chief Minister T. R. Zeliang telling AFP that “the situation remained tense but… under control.”

Tensions had been rising in the district since Feb. 24 when police arrested the alleged rapist, Syed Farid Khan, over the assault of a 19-year-old tribal woman. Thousands of irate tribesmen on Thursday broke into a high security jail before dragging out the Bengali-speaking man, who was stripped and paraded for several miles, while men armed with sticks thrashed him to death.

Another man was shot dead by police after the mob refused to hand over his body, while 60 people were injured in the clashes, which saw attacks on properties belonging to Bengali-speaking residents.

“The act is barbaric, heinous and inhuman,” Tarun Gogoi, the chief minister of Khan’s home state of Assam, said of the lynching. The mob as well as Nagaland’s government earlier called him a Bangladeshi migrant.

“The manner in which the youth was dragged out of police custody and killed brutally by a mob on the streets is highly condemnable,” Gogoi said in a statement.

“The Nagaland government must ensure that every person who was part of the mob is brought to justice,” said Shemeer Babu, Amnesty India’s programs director.

Nagaland’s indigenous tribal groups, especially the largest Naga tribe, have for years accused the growing population of Bengali-speaking Muslims from nearby Assam state and Bangladesh of illegally settling on their land and usurping resources. Nagas have previously campaigned to evict Bengali-speaking immigrants from their territory, who they claim entice local girls into marriage for getting tribal status.

Most of India’s northeastern states are mired in decades’ old ethnic and linguistic violent conflicts between different tribes as well as non-tribals. Scores of Bengali-speaking tea workers were killed in Assam in December by armed militants belonging to Bodo tribe, an indigenous community in northeastern India, which demands exclusive rights over local resources.