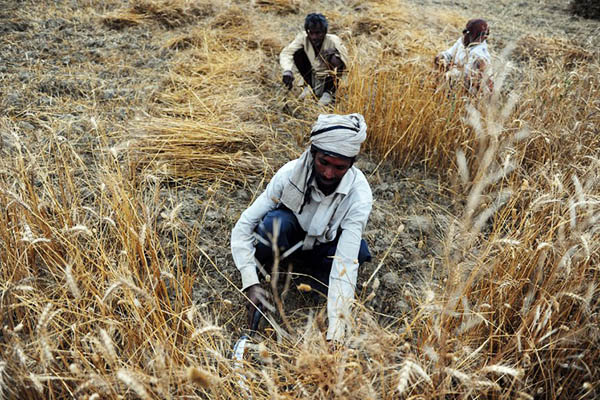 New Delhi’s push to overhaul property laws has made it easier for big businesses to forcibly acquire land.

Farmer Tarachand Mathur was one of millions of Indians who voted Narendra Modi into power last year, but the government’s push to make it easier for big business to forcibly acquire land means he won’t be backing the premier again.

Mathur, 64, believes Modi has turned his back on the plight of farmers, many of whom have seen their crops devastated by unseasonal rains since the start of this year. “I am on the brink of ruin,” he said, close to tears, as he tended the wheat growing on his smallholding in Kanjhawala village. “The rain gods don’t hear us and Modi has also turned deaf to our cries.”

India’s poor but powerful farming lobby flocked to Modi’s rightwing Bharatiya Janata Party (BJP) at the general election last May, when the Hindu nationalist premier won the biggest mandate in 30 years. But anger in rural areas has been mounting over his government’s bid to overhaul land purchasing laws, compounding woes over extensive damage to winter crops due to unseasonal rain across northern India.

The government argues the changes are needed to spur development—from building new cities and factories to more roads and industrial corridors. But its attempts to push the Land Acquisition Bill through parliament have been stonewalled by a united opposition, which controls the upper house.

While the government has issued a temporary order making it easier to buy land for projects, the changes need parliamentary approval before they can be made permanent.

The left-leaning opposition Congress party will on Sunday lead a mass street protest against the legislation in the capital before the reopening of parliament, when the government is expected to reintroduce its bill. The new bill overhauls legislation passed by the previous Congress-led government in 2013, which was a key initiative of its decade in power. It would exempt projects related to defense, rural housing and power, along with industrial corridors, from the requirement that 80 percent of the affected landowners must agree to a sale. It also does away with the need for a “social impact assessment” to find out how many people would be affected by the loss of land.

The BJP says these rules are restrictive and deter the investment needed to fuel India’s growth. “To be able to push the manufacturing sector, you need land,” party spokesman G.V.L. Narasimha Rao told AFP. “And that land can come only from the existing land available… Industries can’t come up in [a] vacuum.”

Critics, however, say India’s development should not come at the cost of its poorest. “The government thinks it owns the resources. This is wrong,” said Sanjay Parikh, an expert on land and environmental laws. “Resources ultimately belong to the people. The land must remain with the farmers.”

Modi recently used his monthly radio show to appeal to farmers not to oppose the bill, repeatedly assuring them that acquiring their land would be a “last resort.” But the unpopular bill has given a boost to the ailing Congress party, whose vice-president Rahul Gandhi this week returned from a sabbatical of nearly two months to lead Sunday’s protest.

Bhupender Rawat, from the non-profit National Alliance for People’s Movements, believes the land bill could inflict serious political damage on the BJP government. “Farmers are not fools, they can see what Modi is trying to do,” he told AFP. “Modi has been going abroad and telling investors: ‘Come to India, we will give you cheap land and labor.’ The farmers are feeling cheated, and rightly so.”

Many have good reason to be skeptical about the government’s assurances. Baljeet Singh, another Kanjhawla farmer, said the government forcibly acquired the deeds to his land in 2005, but had yet to take possession of it or provide adequate compensation.

“We thought Modi’s government would address our problems, that is why we voted for him. But look what he is doing. We will not back him again,” said the 70-year-old.