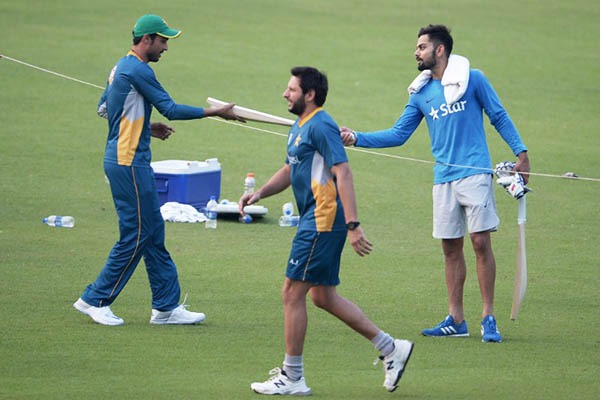 India’s Virat Kohli gifted Pakistani pacer Mohammad Amir one of his bats on Friday, a gesture that grabbed attention ahead of today’s World Twenty20 clash between the rival nations.

The star Indian batsman took the bowler by surprise as he handed over the prized bat to Amir during a pre-match practice session at the Eden Gardens stadium in Kolkata. The 23-year-old pacer has had to face stiff resistance from many quarters including his own teammates after serving a prison term and a five-year ban for spot-fixing in a Test match against England at Lord’s in 2010.

Kohli, 27, has however openly welcomed Amir’s return to the international fold. “He is a very skillful bowler and I wish him all the best. He has worked hard to come this far and it takes a lot of courage,” Kohli had said ahead of the Asia Cup in Bangladesh.

Kohli, a firebrand batsman known to wear his heart on the sleeves, appeared cheerful Friday while having an animated chat with Pakistan skipper Shahid Afridi. Afridi hit the headlines in India and back home after speaking of the “love” he receives from Indian fans on arriving in Kolkata last week.

“We have always enjoyed playing in India and have been loved by Indian crowds more than crowds back home in Pakistan,” Afridi said.

The camaraderie on display is likely to take a back seat though when the two sides face off in what is the most eagerly awaited clash of the tournament. India need to win this game after their shock loss against New Zealand while Pakistan are keen to shrug off their World Cup jinx against their arch rivals.

Pakistan have never won a World Cup encounter in six 50-over meetings and four T20 clashes with India.