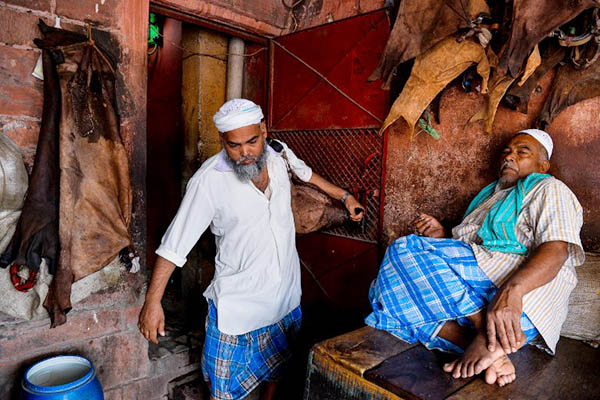 Advent of piped water, cheap bottled options, has decimated the business of Bhishtis

Shakeel Ahmad wanders the cramped alleyways of Old Delhi offering water from a goat hide canteen slung over his shoulder, a centuries-old service welcomed by thirsty vendors toiling under the baking Indian sun.

Ahmad is one of last Bhishtis, a community of water carriers fading into history after generations of quenching thirsts in Delhi’s old quarter. Bhishtis have been supplying businesses, pilgrims and passersby with swigs from their swollen canteens since the Mughals ruled India, an era before piped water sounded the death knell for their trade.

“I spent my childhood doing this. My ancestors too spent theirs,” Ahmad told AFP at the footsteps of Jama Masjid, a towering mosque built at the height of the Mughal empire. “Now I am the last. I’m not sure if my children, if the next generation, will do this or not.”

For centuries, Bhishtis have sourced water from an underground basin deep beneath the warrens and Mughal-era monuments of Old Delhi—a bustling quarter hidden away from the modern Indian capital that grew up around it. Inside a small Sufi shrine, Ahmad—like countless Bhishtis before him—draws water from a deep well, filling his large goat skin canteen known as a mashaq to the very brim.

“The water in this well hasn’t stopped since it was dug,” said Ahmad, gesturing to the murky depths of the pit below. “It dried up just once when construction began on the Delhi metro… But then it just came back on its own.”

It is backbreaking work hauling a full mashaq around the crowded, cobbled streets in the blistering Indian summer, where daytime temperatures regularly exceed 40 degrees celsius. A full canteen carries roughly 30 liters—enough to earn a Bhishti a mere 30 rupees, a pittance for the hard labor involved.

“My children will find it difficult to do this job. I am the last [of my family],” Ahmad said.

The advent of piped water, and cheap bottled options, has decimated their business, but there’s still a handful calling out for Ahmad as he treads the lanes with his dripping flagon. Old shopkeepers, parched in the midday sun, cup their hands for a mouthful of water, while street vendors have him fill cooling units and drink buckets to ward off the worst of the heat.

Problems with the piped water supply—not an unusual occurrence in the creaky old neighborhood—are a godsend for Ahmad, even if a nuisance for everyone else. “When they have their regular supply, no one bothers to call,” Ahmad said.

Business may not be booming but tourists and pilgrims still double take when they see the elderly Bhishti in his white Muslim tunic and prayer cap carting his water skin, a flashback to a bygone era. “Many people are amazed to see that this profession still exists… that something from the time of the kings still exists. They are surprised and happy to see us,” he said.