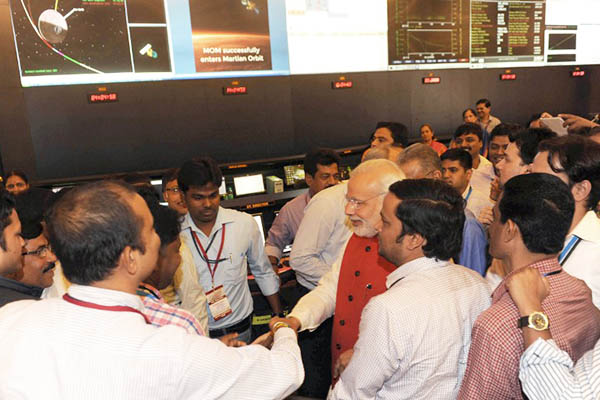 The Mangalyaan spacecraft will now study the Red Planet for evidence of life.

India became the first nation to reach Mars on its maiden attempt Wednesday when its low-cost Mangalyaan spacecraft successfully entered orbit around the Red Planet after a 10-month journey.

“India has successfully reached Mars … History has been created today,” a jubilant Prime Minister Narendra Modi said from mission control after entry into orbit was confirmed at 8:02 a.m. “We have dared to reach out into the unknown and have achieved the near impossible,” he added amid raucous cheering from scientists at the Indian Space Research Organization’s base near Bangalore.

The success of the mission, which is designed to search for evidence of life on the Red Planet, is a huge source of national pride for India as it leaves its Asian rivals, including China, in the shade. India now joins an elite club of the United States, Russia and Europe who can boast of reaching Mars. More than half of all missions to the planet have ended in failure, including China’s in 2011 and Japan’s in 2003.

No single nation had previously succeeded at its first go, although the European Space Agency, which represents a consortium of countries, did also pull it off at its first attempt.

Now Mangalyaan has reached Mars, the probe is expected to study the planet’s surface and scan its atmosphere for methane, which could provide evidence of some sort of life form. Mangalyaan is carrying a camera, an imaging spectrometer, a methane sensor and two other scientific instruments.

At just $74 million, the mission cost is less than the estimated $100 million budget of the sci-fi blockbuster Gravity. That figure also represents just a fraction of NASA’s MAVEN spacecraft, which successfully began orbiting the fourth planet from the Sun on Sunday.

Indian engineers employed an unusual “slingshot” method for Mangalyaan’s interplanetary journey, which began when it blasted off on Nov. 5 last year. Lacking enough thrust to blast directly out of Earth’s atmosphere and gravitational pull, it orbited the Earth for several weeks while building up enough velocity to break free. Despite the complications, scientists had been increasingly confident of success and mission director M. Annadurai told AFP on Tuesday that all was going to plan.

“Everything is going on smoothly as programmed and the spacecraft’s health is normal,” said Annadurai.

Critics of the program say a country that struggles to feed its people adequately and where roughly half have no toilets should not be splurging on space travel. But observers say it is the perfect opportunity to showcase India’s technological prowess as well as a chance for some one-upmanship on its rival Asian superpower. “It’s a low-cost technology demonstration,” said Pallava Bagla, who has written a book on India’s space program.

“The rivalry between regional giants China and India exists in space too and this gives India the opportunity to inch ahead of China [and capture more of the market],” Bagla told AFP.

The decision to launch the mission was announced in a speech an Independence Day 2012, shortly after China’s attempt flopped when it failed to leave Earth’s atmosphere. India has so far launched 40 satellites for foreign nations, since kickstarting its space program five decades ago. But China launches bigger satellites.

The probe is expected to circle Mars for six months, about 500 kilometers from its surface. Its scientific instruments will collect data and send it back to Earth.

Is Baby Bhutto getting ready to announce he will take back every inch of mars from india ?

No – his plan is to grab Kashmir. Since Himalayas are in Kashmir, he will reach the mountain top and copy India’s Slingshot method – jump to Moon from the Himalayas and the go to Mars.