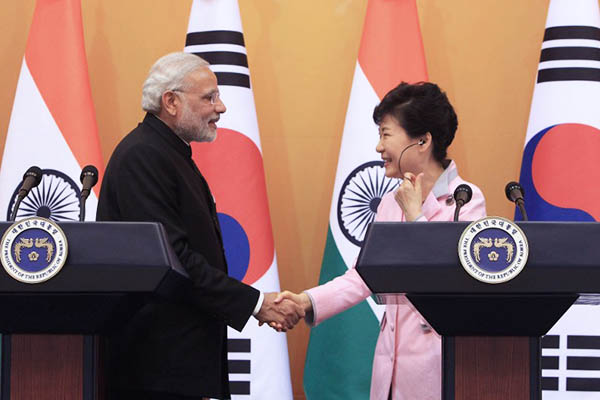 Indian media claims the premier is hoping to secure $10 billion in soft loans during trip to Seoul.

On his first visit to Seoul since taking office a year ago, Modi was to meet President Park Geun-Hye to discuss issues ranging from diplomacy and the economy to the security situation on the Korean peninsula. The trip—part of a six-day East Asia tour—is packed with a whirlwind of meetings with business tycoons from South Korea’s largest conglomerates, including Hyundai, Samsung and LG. All three manufacturing giants operate plants in India where they enjoy sizeable shares of the vast consumer market for cars, smartphones and home appliances.

Modi is looking to secure promises of bigger investments as part of his “Make In India” initiative, aimed at fostering the nation’s relatively weak manufacturing sector. “South Korea has made far less investment in India than other Asian rivals like China or Japan despite the country’s vast growth potential,” said Oh Hwa-Suk, head of the Seoul-based India Economy Research Institute.

On Tuesday, Modi is scheduled to visit the main shipyard of the world’s largest shipbuilder, Hyundai Heavy Industries, in Ulsan and to meet with its chairman Choi Kil-Seon. Hyundai Motor Company, South Korea’s largest carmaker, operates two plants in Chennai, and expanding that investment is expected to be high on the agenda during a meeting between Modi and Hyundai Motor chairman Chung Mong-Koo in Seoul, also on Tuesday.

A planned meeting with J. K. Shin—the head of Samsung’s mobile unit—in Seoul is also expected to help accelerate the South Korean firm’s reported plans to build a third plant in India, one of the world’s fastest-growing handset markets.