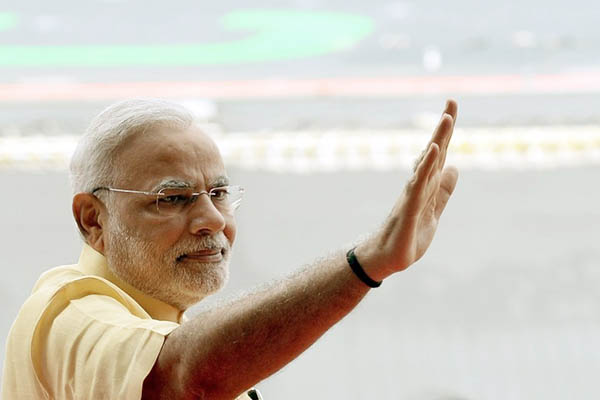 Indian Prime Minister Narendra Modi will make his first visit to China next week, seeking to overcome strains between the rivals over a border dispute and Beijing’s growing regional clout.

Modi will meet with China’s leaders during the three-day visit as part of an Asian tour that will also take him to South Korea and Mongolia, the Indian government said Tuesday. China confirmed the visit.

Modi is eager to secure Chinese funding for crumbling infrastructure and other projects for India after storming to power last May on a pledge to reform and revive Asia’s third-largest economy. Ahead of the visit, Modi joined Sina Weibo, China’s version of Twitter, attracting tens of thousands of followers within hours.

“I’m looking forward to my visit to China from May 14 to 16 to enhance the friendship between our two ancient civilizations and the largest developing countries,” one Modi post said on Tuesday. “I firmly believe this visit to China will strengthen the stability, development and prosperity of Asia,” wrote Modi, an avid user of social media who has 12 million followers on Twitter.

Many comments on Weibo, however, were more confrontational than welcoming, with plenty demanding India give back territory along the border, a source of tension between the two nations for decades.

Modi, a staunch nationalist, has signaled he will pursue a more muscular foreign policy than the previous left-leaning government, including on border issues.

Chinese President Xi Jinping visited India in September when the leaders of the world’s two most populous countries emphasized cooperation and business deals such as funding for railways. But Xi’s rare visit, the first by a Chinese president in eight years, was overshadowed by a standoff between troops on their remote frontier.

Relations are dogged by mistrust stemming from a brief, bloody border war in 1962 over the northeastern Indian state of Arunachal Pradesh, areas of which Beijing claims as Zangnan or South Tibet. Both sides regularly accuse the other’s soldiers of border incursions.

Modi warned China to shed its “expansionist mindset” at an election rally last year. China hit back, saying it “never waged a war of aggression to occupy any inch of land of other countries.”

Modi will travel to Beijing, Shanghai and the historic northern city of Xian before becoming the first Indian premier to visit Mongolia. He will then head to South Korea for talks with President Park Geun-Hye and business leaders.

Modi on Weibo said Xi had invited him to visit “his hometown Xian” during a previous meeting.

Since winning power, Modi has tried to strengthen relations with India’s neighbors, along with the United States, as a counter-balance to China’s rising influence in the region. China has cultivated close ties with India’s rival Pakistan, and its growing influence over other South Asian nations has sparked worries of a deliberate strategy to encircle India.

“Strategically, Modi has rounded up friends in Japan, U.S., Vietnam and Australia in the last one year and in that sense he is going there [to China] with some strength,” New Delhi-based China analyst Madhu Bhalla told AFP. “The Chinese will look at him more seriously than India’s previous leader Manmohan Singh.”

China is India’s biggest trading partner with two-way commerce totaling close to $70 billion. But India’s trade deficit with China has soared from just $1 billion in 2001-02 to more than $40 billion, Indian figures show.

Experts say Modi must bridge the deficit by seeking greater access to the Chinese market, with the two sides targeting annual bilateral trade of $100 billion this year.