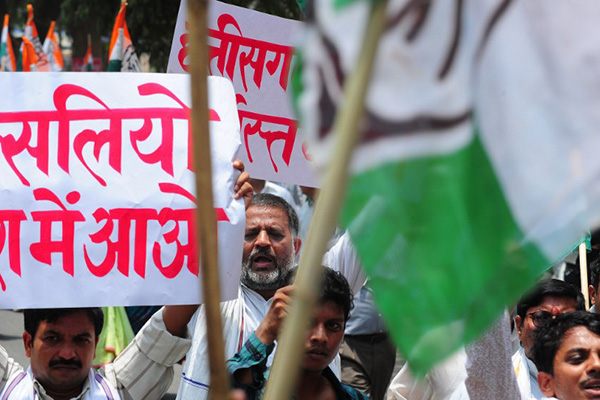 Maoist rebels in central India have killed at least 36 people this year alone.

A heavily-armed gang of nearly 300 Maoist rebels killed at least 24 people in an attack on a convoy of local Congress party leaders and supporters in central India, police said Sunday.

The landmine-and-gun attack on Saturday was the deadliest in three years, and the latest in a long-simmering conflict that pits the insurgents against authorities in the forests of mainly central and eastern India.

State Congress chief Nand Kumar Patel, his son Dinesh, and former state home minister Mahendra Karma—who had set up a controversial anti-Maoist group in 2005—were among those killed in the assault in the Jagdalpur area of Bastar district, 375 kilometers south of state capital Raipur. “The attack has killed 24 people so far. As many as 37 people are also injured, many of them seriously,” according to state police director-general Ramniwas.

Congress chief Sonia Gandhi, who rushed to the Chhattisgarh state capital along with Prime Minister Manmohan Singh after the ambush, condemned what she called a “cowardly act” by the Maoists. “It is not an attack on Congress or its leaders, but an attack on democratic values,” she told Congress party workers after visiting the injured, according to the Press Trust of India news agency.

The state government has announced a judicial inquiry into the killings.

The rebels triggered a landmine before opening fire on the convoy of Congress party workers and leaders who were leaving the area after a political rally, police said. At least six policemen also died in the attack.

“When our cars reached a turning point, the Naxals started firing,” an injured Congress worker told India’s NDTV news network, referring to the rebels also known as Naxalites. “Two cars were blown up and the firing continued for almost one and a half hours. Some of us lay on the road to save ourselves.”

Prime Minister Singh, who has described the Maoists as the country’s most serious internal security threat, said the ambush should spur the battle against extremists. “Those who have lost their lives in this barbaric attack are martyrs of democracy,” he said after visiting the wounded in hospital on Sunday. “We have to be more determined in fighting Naxal extremism. These lives should not go in vain.”

Maoist rebels have been waging a bloody conflict against Indian authorities since 1967. They demand land and jobs for the poor, and want to establish a communist society by overthrowing what they call India’s “semi-colonial, semi-feudal” form of rule.

The revolt is believed to have cost tens of thousands of lives.

A rebel assault in April 2010 killed 76 policemen in Chhattisgarh where the Congress party is the main opposition. Eleven policemen were killed in March last year in a landmine blast in the western state of Maharashtra near the border with Chhattisgarh. Three policemen were also killed a fortnight ago when Maoists launched an overnight attack on a state-run broadcaster in the troubled state. And last week a policeman and eight villagers were killed in a shootout between rebels and security forces in the Bijapur district of the state.

Critics believe attempts to end the revolt through security offensives are doomed to fail, saying the real solution is better governance and development.

“The need of the hour is to stand together as a nation and vow to fight this menace that threatens our democracy,” he said on Twitter. However, Congress workers blocked road traffic and staged protests in Raipur to press for the dismissal of the BJP state government for failing to prevent the attack.