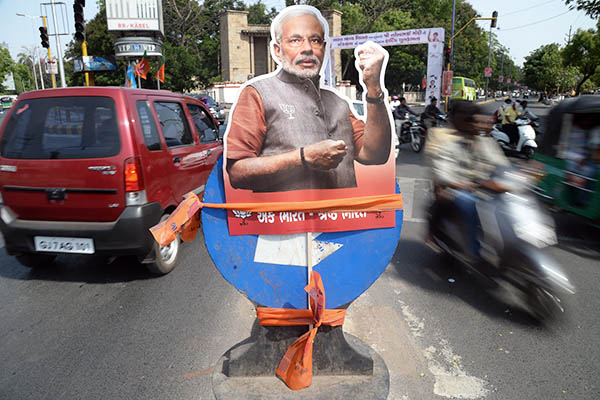 Millions of India’s Muslims fear Hindu nationalist Narendra Modi’s landslide election will fuel religious discrimination, intolerance and even bring bloodshed, but some are also prepared to give him a chance.

The rightwing hardliner stormed to victory at the polls, throwing the left-leaning secular Congress from office and handing his Bharatiya Janata Party (BJP) a powerful mandate for promised sweeping reforms. Critics warn the size of the victory will empower Modi, steeped in Hindu nationalist ideology and tainted by anti-Muslims riots, to run roughshod over religious minorities, particularly India’s 150 million Muslims.

But some, at least, are hopeful that Modi’s promise during the campaign of jobs and development to revive the stalled economy will benefit all classes, castes and religions, not just the Hindu majority. “My hopes have been rekindled, I am looking forward to better days under his rule,” said Abdul Salaam, 29, a Muslim tailor in Varanasi, a Hindu holy city which has a sizeable Muslim community. Salaam pointed to the prosperity of western Gujarat state, where Modi was chief minister for 13 years, saying he hoped these policies could be reproduced nationally.

Muslim widow Parveen Banu, whose family was killed in communal riots in Gujarat, said the BJP leader would not dare turn against Muslims after weeks on the campaign trail preaching national unity. Banu remembers running through the blood-splattered alleys of Ahmedabad to escape the Hindu mobs that killed her husband and four children. Banu, 40, has since rebuilt her life and now runs a shop selling mutton minutes from her home in a Muslim slum—12 years after the riots that killed at least 1,000 people, mostly Muslims.

As chief minister at the time, Modi is dogged by allegations he failed to stop the bloodshed, although he has been cleared by a court investigation. “Of course Modi hates Muslims, but as prime minister can he really afford to show it?” said Banu. “Plus, he has spoken of cultural unity and he has to live up to our expectations and I believe he will. He’s not crazy. I just hope Allah shows him the right way.”

Despite the optimism that some Muslims have, many fear life under a Modi-led government and voted in large numbers against him. According to a nationwide post-poll survey, only nine percent of Muslims voted for the BJP while 43 percent opted for Congress. “Muslims are the only community to vote in big numbers for Congress,” said Sanjay Kumar, whose Delhi-based Center for the Study of Developing Societies conducted the poll.

Congress, India’s national secular force that has ruled for all but 13 years since independence, was obliterated, winning just 44 seats in the 543-member parliament. Modi secured the strongest mandate of any Indian leader for 30 years, after the BJP won 282 seats, dominating even in states with large Muslim populations such as Uttar Pradesh and Maharashtra.

The number of Muslim lawmakers dropped from 30 in the outgoing parliament to a record low of 24, limiting their clout for the next five years, The Times of India said.

Nazma Begum, who runs a small cloth-dyeing business in Varanasi, said she feared few could now stop Modi and the hardline Hindu nationalist groups that are allied to the incoming prime minister. “I find Modi scary. I never imagined he would have such a big win. It’s sad because now he will have a free rein, he will do as he pleases. Who would dare to question him?” said the 40-year-old Muslim widow.

Modi himself struck a note of unity in his first comments after his win, saying: “I want to take all of you with me to take this country forward.” But while Modi has stressed inclusiveness and development, his top aide Amit Shah was briefly banned from campaigning for inflammatory comments seen as a bid to polarize voters along religious lines. Modi also fought and won the seat of the sacred city Varanasi, viewed as an effective way of burnishing his Hindu nationalist credentials.

In India-administered Kashmir, where an insurgency has long raged against Indian rule in favor of independence or merger with Pakistan, some Muslims are hopeful for Modi for different reasons. Chief Muslim cleric Mirwaiz Umar Farooq said he wanted the new government to take “bold steps” to solve the dispute over Kashmir.

Modi told media during the campaign that he would pursue the policies followed by former BJP premier Atal Behari Vajpayee, who sought several times to make permanent peace with Pakistan over Kashmir. “Modi has won on the promise of development and progress which can happen when there is peace, but an unresolved Kashmir issue is a hindrance to peace,” said Farooq.