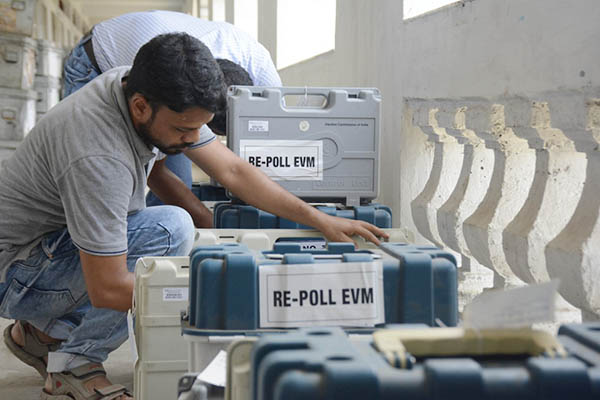 Members of as many as 22 parties called on the poll watchdog and demanded that electronic machines used to record votes be guarded more stringently, and that counting be done in a fair and transparent manner.

India’s marathon election wound up on Sunday after almost six weeks of voting, with results expected on Thursday. Several polls have suggested Modi’s Bharatiya Janata Party (BJP) and its allies would secure enough seats to secure a second five-year term.

Opposition leaders—including from the main Congress party—said on Tuesday the Election Commission must ensure voting machines were not manipulated in any way. Their concern stemmed from video clips on social media purportedly showing attempts to replace the machines in strong-rooms ahead of counting in some places.

“We are asking the Election Commission to respect the mandate of people. It cannot be manipulated,” said N. Chandrababu Naidu, of the regional Telegu Desam Party. Satish Chandra Mishra, a member of the Bahujan Samaj Party (BSP), alleged “large-scale bungling” of the voting machines in Uttar Pradesh state, the biggest by number of lawmakers.

The Election Commission moved swiftly to deny the reports, saying voting machines were “absolutely safe in strongrooms,” and those shown in video clips were reserves. “The Election Commission of India would like to emphatically and unambiguously clarify that all such reports and allegations are absolutely false, and factually incorrect,” it said in a statement. “The visuals seen viral on media do not pertain to any EVMs [electronic voting machines] used during the poll.”

It also said candidates and their agents could be present in strongrooms “for 24×7 vigil at all times.”

The BJP and the main opposition Congress Party, led by Rahul Gandhi, have fought the most acrimonious election campaign in decades, exchanging almost daily barbs and insults. A slew of exit polls released on Sunday projected the BJP and its allies would win between 282 and 313 seats of the 543 available in India’s lower house.

While the BJP has appeared cautiously optimistic about the projections, Congress and other opposition parties have sought to downplay them. Priyanka Gandhi, a popular politician who is the sister of Congress president Rahul Gandhi, has urged her party not to be disheartened by the exit polls. “These are crafted to undermine your spirits,” she said, according to the Press Trust of India.