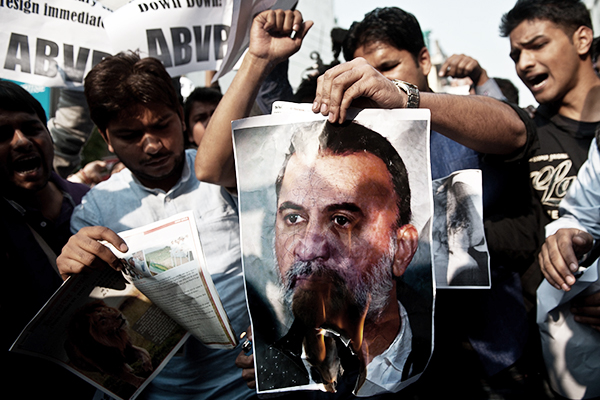 Just hours after police in Goa decided to file rape and sexual assault charges against Tarun Tejpal—founder and editor of India’s leading investigative newsmagazine, Tehelka—the journalist shot back by accusing the victim of lying.

“It is a totally mendacious account of what happened, in its details, in its tonalities, in its very suggestion of non-consensus,” Tejpal told The Indian Express in an email. “In cold light of day, much of it will sound unsavory, but now the inquiry will reveal it all.”

One of Tehelka’s female staffers has accused Tejpal of raping and sexually assaulting her, twice, at a Goan hotel last month.

On Friday, the local police brought charges against Tejpal and launched an investigation. “A special investigation team has been formed which has left for Delhi to interrogate Tejpal,” said Kishen Kumar, director-general of Goa police, adding that police were also examining the hotel’s CCTV footage.

If convicted, Tejpal faces at least seven years in prison.

Prior to the charges being filed, Tejpal was widely seen in India as trivializing the matter after he announced he would take a six-month leave from his publication as “penance” for the alleged rape. He had admitted “misconduct” in an email to the managing editor of his publication and offered to step aside temporarily to atone for his behavior.

“A bad lapse of judgment, an awful misreading of the situation, have led to an unfortunate incident that rails against all we believe in and fight for,” Tejpal wrote in his email, which was sent to staff at the magazine on Wednesday. “I must do penance that lacerates me.”

Tejpal now says that his employee—whose identity is shielded under India’s anti-rape laws—is speaking “half-truths.” “My lawyers know I am being framed, and are also aware of the political forces driving much of it now,” he told The Indian Express. He also wants the CCTV footage “examined and brought out. That’s empirical. It should hopefully clear the air.”

With the Indian media newly sensitized to sexual assault cases after a string of widely publicized gang-rape cases this year, the Tejpal saga has been front-page news—and earned him rebuke.

“What penance? What atonement? An apology and offer to step down may be his personal way of pitying himself and feeling remorse, but that doesn’t absolve him of his crime,” said rights activist Ranjana Kumari, director of the Centre for Social Research, adding that “gross misuse of power” and “misogyny” were common in Indian workplaces. “This case is nothing new. Such cases have been happening for ages, but now girls are mustering up the courage to speak out.”

The Network of Women in Media, India, called on media organizations in the country to take action against sexual harassment and establish in-house complaint committees: “Sexual harassment of women journalists at the workplace is not new. The NWMI has issued several statements over the years in response to specific cases.”

Newsweek contributor Salil Tripathi, in his piece for the website Live Mint, says: “This is a rather simple story of abuse of power by someone in authority picking on someone vulnerable. That the reporter is the daughter of Tejpal’s friend, and that she is a close friend of Tejpal’s own daughter, makes the incident revolting, but in the ultimate analysis, it is not relevant—for no woman should be subjected to what the reporter apparently underwent.”

The victim had reportedly asked for an internal investigation and a written apology to be circulated to staff. Tehelka’s managing editor, Shoma Chaudhury, told The Indian Express that “the matter was taken up internally and has been addressed and redressed.”

Tehelka pioneered undercover sting operations and has published a string of scoops on cricket match-fixing, the involvement of politicians in religious riots in 2002, and bribery.

The Tehelka scandal broke just after New Delhi police launched a probe against an unnamed retired Supreme Court justice following allegations of sexual harassment by a young female lawyer. Gujarat’s chief minister, Narendra Modi, is also facing trouble after revelations that one of his top aides ordered surveillance of a woman at the behest of his “master.”