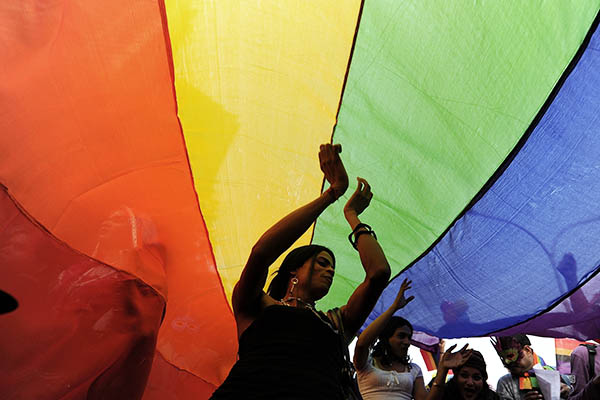 India’s Supreme Court on Wednesday reinstated a colonial-era ban on gay sex that could see homosexuals jailed for up to 10 years in a major setback for rights campaigners in the world’s biggest democracy.

A two-judge bench struck down a Delhi High Court ruling in 2009 that Section 377 of the Indian penal code prohibiting “carnal acts against the order of nature” infringed the fundamental rights of Indians. The landmark ruling four years ago emboldened the still largely closeted gay community, which has since campaigned publicly against widespread discrimination and ignorance.

But a two-judge Supreme Court bench headed by G. S. Singhvi, who will retire on Thursday, found that the High Court had overstepped and that the law against gay sex was constitutionally valid. “It is up to parliament to legislate on this issue,” Singhvi said in the judgment, which crushed the hopes of activists who had fought the case and led to tears outside the court.

The 2009 High Court decision was strongly opposed by religious groups, particularly leaders of India’s Muslim and Christian communities, who appealed to the Supreme Court.

“Such a decision was totally unexpected from the top court. It is a black day for the community,” Arvind Narayan, a lawyer of the Alternative Law Forum gay rights group, told reporters outside court. “We are very angry about this regressive decision of the court,” he added.

Rights campaign group Amnesty International said the ruling was a “body blow to people’s rights to equality, privacy and dignity,” while a legal challenge from gay rights groups is also likely. “We will explore all options, probably look into the option of a review petition,” T. Tandon, a lawyer appearing for Naz Foundation, a non-profit group that works with HIV-AIDS patients, said outside the court house. “The movement of gay rights is so much stronger now. It is not 2001, it is 2013. You can’t have a decision like this.”

While protests were expected later in New Delhi and Mumbai, religious groups who appealed the decision were delighted with the outcome. “We know that homosexuality is against nature,” said Abdul Raheem Quraishi, general secretary of the All India Muslim Personal Law Board. “It goes against all its laws and it is what led to the spread of HIV/AIDS,” he added.

The United Nations Development Programme on HIV/AIDS had argued in 2008 that decriminalizing homosexuality would help India to combat the spread of HIV/AIDS, which affects an estimated 2.5 million people.

Dominic Emmanuel, spokesman of the Delhi Catholic Archdiocese, said before the verdict that the church was ready to accept any decision even though it opposed homosexuality. “The church has a very clear stand on people with different sexual orientations. Though they are different from … normal people, they should be respected, accepted and there should be no signs of discrimination against them,” he told NDTV network.

Gay sex has long been a taboo subject in conservative India, where homophobic tendencies abound and many still regard being gay as a mental illness. In recent years, however, the country’s gay community has raised its profile through gay pride marches, magazines and events, which have created awareness and encouraged many to come out of the closet.

The decision from the Supreme Court puts India back in the company of most nations in the Islamic world and many African countries, which criminalize homosexuality. “It is highly embarrassing for the country because now we will be among the dirty dozens of the world,” said Narayan, the lawyer from the Alternative Law Forum.

“The judgment is astounding,” said Parmesh Shahani, author of Gay Bombay: Globalization, Love and (Be)longing in Contemporary India. “If you read the High Court judgment—which was incredibly progressive and intelligently worded—it said the state had no business in interfering with who private citizens choose to love.”