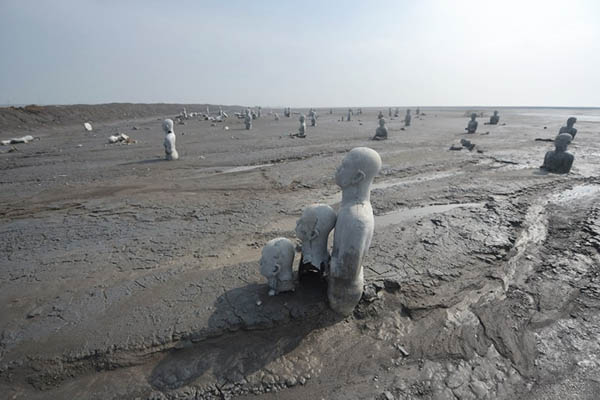 Harwati forces a smile as she guides visitors around a bubbling mud volcano in Indonesia, pausing as they snap selfies on the bleak wasteland she once called home. These disaster tourists are a lifeline for the single mother who lost everything when the earth beneath a paddy field near her village opened up without warning 10 years ago, sending pungent, steaming mud bursting out, unabated.

The mudflow buried villages, factories, shops, and even a major highway in the Sidoarjo district of Java island. Thirteen people died when an underground gas pipeline in the disaster zone exploded, while thousands were left homeless.

Today Harwati and many others scrape a meager living from the curious visitors who flock to see rooftops and debris poking above the bubbling mud lake. “This is the only way to earn a living and afford school for my kids,” said Harwati. “After my village was flooded, there were no jobs.”

Visitors pose next to faceless statues lying semi-submerged in the mud, a silent reminder of the human toll of this disaster.

As victims prepare to mark 10 years since the start of the disaster, the mud geysers show no signs of stopping: The equivalent of 10 Olympic swimming pools of mud and water still spurt out daily. An area roughly equivalent to 650 football fields is now buried beneath up to 40 meters of sludge.

Intrigue has surrounded the cause of the mudflow ever since it first gushed out in the densely populated farming area on May 29, 2006. There are two main theories on what triggered it—drilling for natural resources or an earthquake.

Mud volcanoes, which don’t spew out lava or hot ash but instead water and clay, occur globally but Sidoarjo’s is believed to be the biggest in the world. Efforts to plug it, including with huge concrete balls, have proved futile. The area was declared a disaster zone and sealed off, with warning signs dotting the perimeter.

Undeterred, visitors still came and an impromptu industry has sprung up. Busloads of tourists arrive at weekends, and DVDs dramatizing the disaster are hugely popular souvenirs. “I was very intrigued. I really wanted to see how big the mud was, because I had heard many houses were buried,” said Andri, a tourist from Surabaya.

Debate about what caused the strange phenomenon has only fuelled fascination, and protracted the fight for compensation.

Independent studies alternate blame between oil and gas company PT Lapindo Brantas, which was drilling in the area at the time, and an earthquake that struck two days earlier about 260 kilometers away. Lapindo—part of a business empire controlled by Indonesia’s powerful Bakrie family—was eventually ordered to compensate victims, but payments took years, triggering angry protests.

The government finally intervened last year and loaned Lapindo the funds to expedite the remaining payments. Lapindo Brantas says on its website that after investigations, “it was determined that no correlation could be proven between the drilling activities and the mud eruption.”

Tens of thousands of liters of mud leak daily into the nearby rivers and a number of research surveys have detected high levels of heavy metals in the area, including one recent study by Java’s University of Brawijaya. Eco-campaigners warn this has serious implications for the local communities who rely on the waterways.

“It’s not just found in the water or the sediment, but now in the body of the fish,” said Rere Christanto, an activist with the Indonesian Forum for the Environment. “The people who consume these fish, they’re going to be affected. There’s a real danger…There’s a lot of heavy metal in that mud,” he added.

Those living near the disaster site complain of health problems and contaminated land and water. Maksuri, a villager living next to one of the towering dykes, told AFP he was ineligible for compensation despite his water being often clouded with a foul-smelling yellow tinge.

Even some of those who received payouts have found little relief. Many spent virtually all their compensation paying off huge debts accrued setting up their lives from scratch, Christanto explained. He said: “The compensation didn’t make them rich.” He has first hand experience—his parents lost their home in the disaster.

Out at the geyser, tourists shriek as thick muck spurts out of the ground. The tour guides whoop and clap on cue, jokingly encouraging mother nature to put on a show for the visitors. But once the crowds depart, the mood is somber. Mud tourism has helped some entrepreneurial locals eke out a living from their tragedy, but the reality is far from rosy.

Sukampto had a “comfortable life” and a steady job at a furniture factory before the eruption upended his life. Now he earns a pittance shuttling tourists around the disaster zone. He stops to point out where his village was—now nothing but a crumbling wall protrudes from a swamp of clay. He told AFP: “Mosques, schools, boarding houses: everything was lost.”